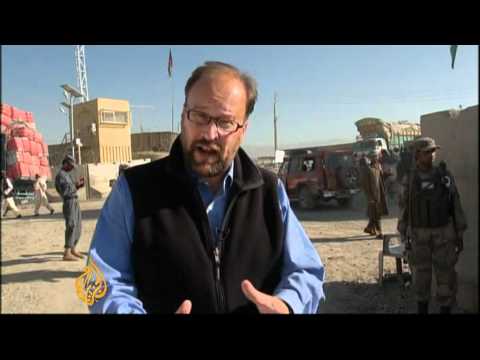 At the NATO summit in Lisbon, it is expected to be announced that although 2014 is the target date by which NATO and US troops would withdraw, in fact a NATO contingent will be in the country thereafter in some capacity. Although this prospect is said to mollify Afghan elites around Karzai who fear being abandoned, it is likely to spur the insurgents to redouble their efforts to expel NATO.

And, the US public is unlikely to be pleased with an open-ended commitment in Afghanistan, since half of Americans want out. Many, as Tom Engelhardt writes, see the war as a boondoggle. And, AP reports that there are concerns that auditing procedures were inadequate to stop fraud concerning the $56 bn. in aid the US has given to Afghanistan.

Likewise, many European leaders are frustrated. French Defense Minister Alain Juppe provoked controversy by saying that Afghanistan is a “trap” for Western forces. He indicated a desire to get French troops out of the country as soon as Afghan soldiers could take over security details.

Before flying to the NATO conference in Lisbon, both Afghan President Hamid Karzai and US Gen. David Petraeus held a one-hour meeting to settle their public spat over night raids on suspected Taliban. Petraeus represented them as coordinated with the Afghan Ministry of Defense and often led by Afghanistan National Army officers, with US special operations troops as partners. Karzai reluctantly agreed, though he had earlier demanded that the night raids cease because they were causing such discontent among Afghans. Some night raids have gone tragically wrong and targeted innocents. It may also be, as the WSJ reported, that Karzai has been offered more oversight over the night raids.

Aljazeera English has a video report on US dependence on warlords in Afghanistan:

Aljazeera also reports on the NATO plan to turn security over to Afghan forces in the Western province of Herat, and the difficulties the strategy faces. (Another thing to note is that Herat has become a suburb of the Iranian city of Mashhad, and a smooth handover there will only occur if the Iranians forebear from playing the role of spoiler.)