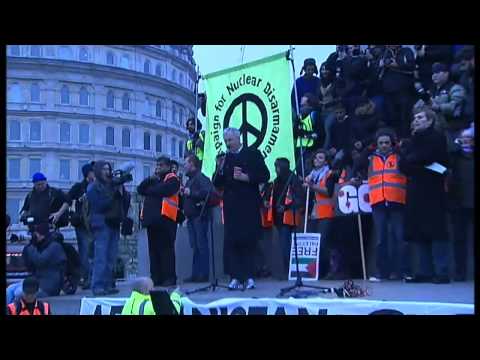 The Afghan Pajhwok News Agency reports a seeming discrepancy between statements of NATO and US officials with regard to when the Afghanistan mission will wind up. NATO Secretary-General Anders Fogh Rasmussen foresaw the beginning of a withdrawal in 2011 and a certain end to those troops’ combat missions by the end if 2014.

In contrast a high anonymous Obama administration official revealed that the US is not committed to a final withdrawal in that year.

The article speculates that the difference between the two statements might derive from a US reluctance to signal to the Taliban that they can easily just wait out the US.

But note that a delay in the US withdrawal could cost $125 billion.

The war showed no sign of slowing down as NATO met in Lisbon. In Laghman province on Saturday, suicide bombers on motorbike killed 4 and wounded 28 others.

Meanwhile, thousands protested the ongoing Afghanistan War in London, with families of military personnel taking the lead. They demanded an immediate British military withdrawal from that country, especially in view of the poor economy in the UK. British Prime Minister David Cameron set Jan. 1, 2015 as the date the UK will leave Afghanistan altogether. ITN has video: