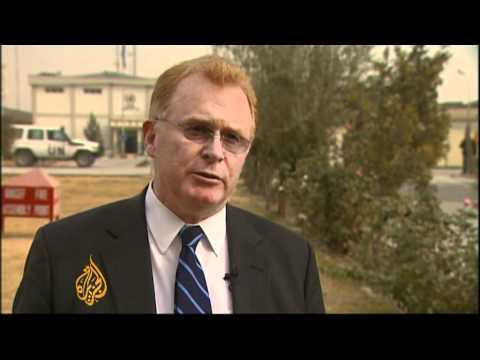 The announcement by the New York Times that one of the supposedly prominent Taliban with whom the Karzai government has been negotiating turns out to be an impostor is only the latest depressing indication that the whole Afghanistan boondoggle is shot through with flimflammery. The US gave a man claiming to be Mullah Akhtar Muhammad Mansur, Mullah Omar’s number two, “a lot of money” to engage in talks. He also was flown to Kabul to consult with President Hamid Karzai at the presidential palace (Karzai, terrified of looking like a laughingstock, denied the meeting).

The incident demonstrates that US and Afghanistan intelligence on the Taliban is very poor, since they don’t even know what the leaders look like. It means that they don’t have double agents high up in the organization with whom they could have checked on Mansur’s absences from his home base– while he was hobnobbing with Karzai and the Americans– so as to confirm his identity.

The incident set me thinking about all the impostures of that war, which are legion. Let us begin with the frankly dishonest discourse about it of both our twenty-first century presidents, who maintain that the US is fighting “al-Qaeda” in Afghanistan. But there is no al-Qaeda to speak of in that country, if by the term one means the mainly Arab Pan-Islamic International that sees Usama Bin Laden as its leader. US forces in Afghanistan are fighting disgruntled Pashtuns, for the most part. Some are from Gulbuddin Hikmatyar’s Islamic Party. Others from the Haqqani family’s Haqqani Network. The Reagan administration and its Saudi allies once showered billions of dollars on Hikmatyar and Haqqani, so they aren’t exactly eternal adversaries of the US. Some insurgents are from the Old Taliban of Mullah Omar. Still others are not so much terrorist cartels as tribes and guerrilla groups who are just unhappy with poppy eradication campaigns, or with the foreign troop presence (they would say ‘occupation’), or with how Karzai has given out patronage unequally, favoring some tribes over others. The insurgency is almost exclusively drawn from the Pashtun ethnic group.

So the war is not about al-Qaeda.

My guess is that the war is mainly an example of mission creep. The US and other Western powers stood up the Karzai government in late 2001, and they would suffer a loss of face and a geostrategic reversal if he were hanged from a lamp post like Najeeb, one of his Soviet-installed predecessors. So then they have to do whatever they can to prop up the Kabul government, including crash training for 400,000 troops and police to maintain security.

Despite having gotten where he is through US and NATO help, President Hamid Karzai has been revealed to be on a $2 million a year retainer by Iran. And, his brothers and circle are allegedly highly corrupt, getting unsecured loans from a bank they run to buy posh villas in Dubai.

Then there is the invisibility of the war itself. The first half of the year saw over 3000 civilian deaths and injuries from conflict-related violence, which would be more than 6000 a year this year if the trends continue. Many of those casualties are produced by the insurgents, when Afghan civilians get in the way of their attacks on US & NATO forces or on Karzai’s army and police. But whereas the US press makes sure we know that thousands are killed or wounded every year in Mexico’s drug cartel wars, we hear little about Afghan casualties of the war.

This information vacuum is why a British diplomat even thought the public might buy as plausible his assertion that children in Kabul are safer than those in New York or London.

Aljazeera English has a report on the ensuing controversy:

Quite apart from the bombings in the Afghan capital, far beyond anything in Western capitals, some 1,795 children were killed or wounded in conflict-related violence from September 2008 to August 2010 (admittedly in the whole country and not just in Kabul). Moreover, there are powerful crime syndicates and kidnapping rings in the capital and drug addiction is spreading among even children and youth. He wasn’t speaking of infant mortality, so it isn’t fair to slam him on the grounds that a fifth of Afghan children die before reaching age five. But knowledge of the truly horrific health statistics of Afghan children might have instilled some caution about making Panglossian statements.

Aljazeera English has video on drug addiction even among the very young in Kabul:

Another scam is the whole trope of democracy. Hamid Karzai bald-facedly stole the presidential election in 2009. The parliamentary elections of 2010 were so riddled with fraud that ten percent of the winners had to be denied their seats even by Karzai’s hand-picked electoral commission, and there are charges that the wrong ten percent were thrown out. The elections are on a “non-party” basis, i.e. not actually democratic. Far from supporting democratic forces, the US and NATO have essentially ensconced warlords in power. Sima Samar, the prominent woman politician so lauded by George W. Bush, is no longer in government.

All this is not to mention the bizarre split personality of the Pakistani military, which fights fierce battles against some Taliban, incurring heavy troop casualties, while behind the scenes supporting other Taliban.

Nothing is as it seems in Afghanistan, a war full of impostors. And now a further cruel pretense has been advertised, that the war will be over in 2014. Mostly.