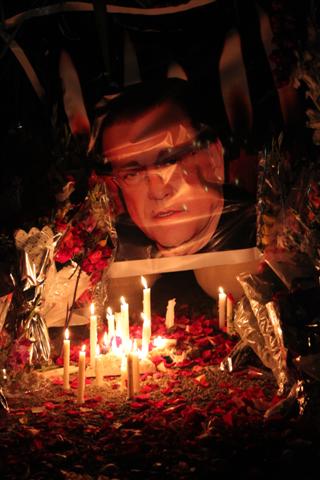 Vigil for Salman Taseer at site of his Murder

Aadil Wainwright writes from Pakistan in a guest column for Informed Comment:

The assassination of Punjab Governor Salman Taseer has laid bare a crucial debate within the Pakistani public over the nature of Islam and the place of Islamic law in national affairs. That it is a debate among Muslims with more than one side is a point that sometimes gets lost in Western discussions of Pakistan.

An investigation into the assassination of Punjab governor Salman Taseer, killed Wednesday 4th January, has been opened. According to Stratfor, it will try to identify why Malik Qadri, the assassin, was able to fire two magazines full of bullets before being apprehended, as well as how Qadri (who was already considered suspicious because of his religious views) was allowed to become part of the personal security detail of a politician whose secular positions had aroused much ire.

Despite confusion over the extent of organisation and the number of individuals involved, the motive of the assassin himself appears clear. Qadri told photographers as he was led away that he was proud to have killed a ‘blasphemer’. It was through actively defending Aasia Bibi, a Christian woman sentenced to death under the blasphemy law in November 2010, that Taseer had became infamous.

A friend of Taseer’s and a fellow campaigner against the law who I spoke to yesterday evening told me with watery eyes that the media should take some of the blame, saying ‘TV channels had dedicated so much air time to footage of Mullahs saying he deserved to die that some people got into their heads that they could just go kill him.’

Like many others, Taseer had insisted Aasia Bibi was innocent. The claim was brought against Bibi six days after a spat with two Muslim women of her village refused to drink water from a glass she had touched because they said it had been defiled due to her Christian faith. Six days after the argument, her accusers said she had insulted the Prophet Muhammed (peace be upon him), Bibi said they were merely trying to settle an old score.

Taseer became a campaigner for Bibi and for reform of the blasphemy law, attracting approbation. Despite threats, he continued to be vocal on the issues he cared about, pointing to the way the blasphemy law is abused as a political tool against minorities and the vulnerable. In a recent interview he said, “This is a man-made law, not a God-made one.”
Looking in to the historical origins of the blasphemy law is beyond the scope of this article, here we merely seek to identify the parameters of the debate.

It will be useful to quote two different authorities interviewed recently about the blasphemy law. Dr. Khalid Zaheer of the University of Central Punjab is against the death penalty for blasphemy and says: “One must concede that there are a few instances that have been mentioned in Hadith literature where the death punishment was apparently inflicted upon people who were involved in the act of blasphemy. However, if you look at these instances and then study the Quranic text, it seems there is a conflict or contradiction.”

By comparison, the leader of the well-established conservative movement Jamaat e Islaami in Karachi, Miraij ul Huda Siddiqui, said of the blasphemy law, “It has been derived from the Quran and Hadith and there is unanimous consensus on this by scholars of varying sects and they also agree with the death penalty.”

Effectively Dr. Zaheer is saying that, though there may be examples of it being implemented in the Hadith, we do not need to consider these because they disagree with what can be described as the humanistic spirit of the Qur’an. Mr. Siddiqui’s argument, on the other hand, is based purely on the legal texts of the Islamic tradition and does not explicitly mention a role for human reason.

Though these are merely quotes from newspaper interviews and the interviewees don’t go into detail, these words illustrate some of the fundamental issues at play here. As Siddiqui’s words show, the traditionalists can frame the blasphemy issue as a simple question of ‘implementing God’s law’, despite the massive complexities involved, and thus appease any who value ‘God’s law’ – of which there are significant numbers in Pakistan . Those who criticize it, whether it be on the basis of an intellectual argument like Dr. Zaheer’s or Salman Taseer’s courageous activism, are contesting a symbol many hold sacred.

One of the over-arching issues at stake is the place and practice of religious authority in Pakistan. As Muhammad Qasim Zaman points out in his book, The Ulema in Contemporary Islam, the Ulema or Muslim clerics in Pakistan insist that the only possible rationale for the state’s existence is that the Muslims of South Asia wanted a separate homeland, whilst an impartial reading of history tells us it is not nearly that simple. Had Muhammad Ali Jinnah, Pakistan’s founder, had his way, Pakistan’s constitution would not have insisted on Shari’ah (Jinnah denounced what he called “theocracy”).

The fact that debate has raged over the blasphemy law and not the broader issue pertinent here – the social status of the minorities which the law is most often used against – is a troubling sign of the times. It suffices to cite one incident here to get an idea of what that status is; in 2009, 8 Christians in Punjab including 4 women and a child were burnt to death for allegedly defiling the Qur’an and police did nothing to stop the violence, nor was the claim that the Qur’an was defiled ever substantiated.

It is very difficult to see how Pakistan’s clerics, who stand on pulpits every Friday and quote ‘God commands justice and good conduct’ (16:90) from the Qur’an, could reasonably defend this law so aggressively when such injustices are committed in the name of defending Islam.

Protecting the honour of the prophet and the religion as a whole is a function of state in traditional conceptions of Islamic law, thus those who argue that the law should be abolished altogether are on thin ice – at least while Pakistan still defines itself as an ‘Islamic Republic’. At the same time however, when there is evidence to suggest that a law is being abused (which could very well have been the case with Aasia Bibi) then it cannot be blindly implemented and Taseer and others like him should be applauded for standing up.

The duplicity of the Ulema becomes ever clearer in the light of Taseer’s murder. Does the Shari’ah consider Taseer’s actions – defending someone accused of blasphemy who he believed to be innocent – as an offense punished with death? Of course not.

The unfortunate reality we must confront is thus: Aasia Bibi and the blasphemy law are – to a very real extent – political symbols which the moderates, the secular elite and the puritans are struggling over. Pakistan is a proud nation of colossal geo-strategic importance, and many perceive the state to be beholden to the wishes of an imperialistic and secularizing superpower. The presence of American special forces in Pakistan’s north-west only serves to confirm suspicions. Is it any wonder that conservatives invoke simplistic rhetoric about defending the prophet in the face of what they see as a crusade?

This should not be the closing point here however. Islam, in most of its historical manifestations, values introspection very highly. Before any one else is killed because of the poisonous rhetoric in the public sphere, those who possess religious influence have an urgent duty to engage in self-criticism.

—
Aadil Wainwright has an MA in Islamic Studies from SOAS and speaks Arabic and basic Urdu. He has studied with traditional scholars of Islam from Jordan, India and Yemen. He is currently based in Pakistan.