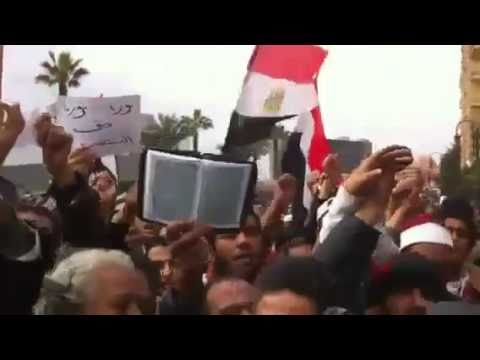 Sunday saw a return to Egypt of themes of national unity across the Christian-Muslim divide that recalled the heyday of early Egyptian nationalism in 1919, when the modern nation was formed in the cauldron of mass demonstrations against British colonial rule.

Nowadays, Copts are roughly 10 percent of the Egyptian population, or about 8 million people. Coptic Christianity is its own branch of the faith, tracing itself to the foundational teaching of the Apostle Mark the Evangelist in Alexandria.

The Al-Arab newspaper reports that Christian protesters conducted funeral prayers over the spirits of the martyrs that have fallen in the demonstrations since January 25. The three Coptic denominations mounted three joint prayer ceremonies.

On Friday, Christian youth had stood guard to protect Muslims as they prayed at Tahrir Square, since people at prayer are vulnerable to the secret police.

AP says that Father Ihab al-Kharat gave a sermon on Sunday in which he said, “In the name of Jesus and Muhammad we unify our ranks … We will keep protesting until the fall of the tyranny.”

Al-Arab writes that crowds of youth participated, under the leadership of prominent Coptic figures such as Michael Mounir, the head of the Coptic Organization of the United States, Dr. Imad Gad, an expert at the Al-Ahram Center for Strategic Studies, and George Ishak, a leader of the Kefaya! (Enough!) protest movement, along with members of Coptic community councils. (Other Copts are more ambivalent about the movement or oppose it).

Michael Mounir said after the prayers that the Egyptian regime has persecuted everyone, Muslim and Copt alike, which was proved by the fact that during the past 12 days, while the police and security forces had removed themselves from the scene, there had been no attacks on churches. Rather, Muslim youth had undertaken to guard them. In the past, he said, despite the presence of security forces, churches and Copts had suffered massacres, the most recent having been on New Year’s day.

A young engineer, Mina Nagi, who was injured on January 25, said during the ceremony (according to al-Arab, ” Speak the truth, and the truth shall set you free!” saying that tyranny possesses the numbers and the weapons, and intimidation and smoke bombs, and the ability to smear reputations. “But we have the truth, and we have our living bodies, which pulse with true love for living, freedom, and life with dignity and justice.” He reasoned that since the youth had done all that, they would be steadfast and courageous in the cold, the rain, in hunger and facing an unknown future from which attacks will be launched from every direction and of various sorts.

He added, “I came because the suffering and poverty that we live through are not a transitional stage, rather these two are the decisive outcome of the conditions of the economic, social and political structure which gives birth to this destitution, along with absence of democracy and the dominance of private interests over public ones.” He said that what is needed is a profound transformation of the structures themselves, and of the conditions that generate poverty, tyranny and oppression. He said, “I came in accordance with my faith in the struggle on behalf of respect for human rights and the construction of a democracy, and deliverance from prejudice and partisanship, and building a transparent and trustworthy order…”

The Christian and Muslim intellectuals issued a joint statement, affirming that the revolution of Egyptian youth had instilled a new spirit in Egyptian souls, in which was apparent an excellent example of national unity… when believers guarded each others’ prayers after the police disappeared. They said that this decision to stand guard came from the youth themselves, not from any religious leadership, and that it demonstrated that places of worship did not need armed guards. “They are Egyptian places of worship, dear to the hearts of all Egyptians..” They recalled that [because of the New Year bombing] Egypt had been on the verge of sectarian war, and clergymen’s statements had brought the situation to an explosive point, when all that tension was stopped by the Youth Revolution.

They accused the government of exploiting religious symbols to abort the Youth Revolution, and complained that some clergymen had taken government silver to denounce the protest movement. They praised clergymen who stayed inside their houses of worship and did not interefere, and called on the media to stop putting reactionary clergymen on the television screen to speak on public affairs.

AFP Arabic reports that Nadir, a young Copt, was holding a placard at Tahrir Square that said, “The Blood of many Copts was shed during the Mubarak era. Leave Egypt!” He complained that the pace of persecution of Christians has increased in the Mubarak era, and the only response of the president had been to try to cover it up. “That isn’t the solution,” he said. Another young Coptic Christian, Ihab, said that fear of the Muslim Brotherhood coming to power was overblown. “A government by the Muslim Brotherhood would be a catastrophe, but there are other choices in Egypt beside Mubarak and the Brotherhood.”

Many Muslims supported the Copts. One, Ahmad al-Shimi, held up a sign that said, “Muslims + Christans=Egypt” with a Muslim crescent and a Christian cross.

Arabic wire services report that thousands of protesters again made their way into Tahrir Square on Sunday, with the theme of commemorating the some 300 martyrs who have died at the hands of the secret police since the protests began on January 25. Dozens bravely sat in front of the tanks positioned around it, to prevent them from moving in and blocking off the public space to prevent further protests. Some of the youth slept in the square in tents or stayed up all night, guarding their right to the public space.

The wire services reprise the story of the Christian role on Sunday. A Coptic Christian priest, carrying a cross, celebrated Sunday mass before the crowd. Next to the priest stood a Muslim imam, carrying a copy of the Qur’an, as the crowd chanted in unison, “We are one hand!” A Coptic preacher lead them in the chant from the altar, “One hand, one hand!” referring to the unity of Christians and Muslims, who express the same demands for a change of regime. A Christian woman named Rana told Reuters Arabic, “All Egyptians, regardless of whether they are Christian or Muslim, want change, liberty, and justice for all people.”

This YouTube video, shot from the crowd, shows them chanting the unity of Christian and Muslim Egyptians and then “One hand, one hand!” You can see the priest’s cross at points above the heads.

Here is a Reuters video report on the unity Mass (can be seen on iPhone and iPad via Foxfire browser app):

So the parallel is to 1919. After World War I, Egyptians began demanding independence from Britain, which had occupied the country in 1882. Nationalist leader and politician Saad Zaghlul and others wanted to lead a delegation (Wafd) to the Versailles peace conference to ensure that Egyptian aspirations for self-determination were heard. The arrogant British jailed Zaghlul early in 1919, and thereby provoked huge multi-class and cross-sectarian demonstrations throughout the country. Copts were as nationalistic as Muslims and as eager to see the backs of the British, and they are clearly visible in photographs of the day, carrying banners with crosses on them. Egyptian women also played a visible role in the protests.

1919 was a foundational moment for the Egyptian nation. The subsequent history of Christian-Muslim relations has had its ups and downs. But at Tahrir Square, Sunday, February 6, 2011 was another such 1919 moment of unity.