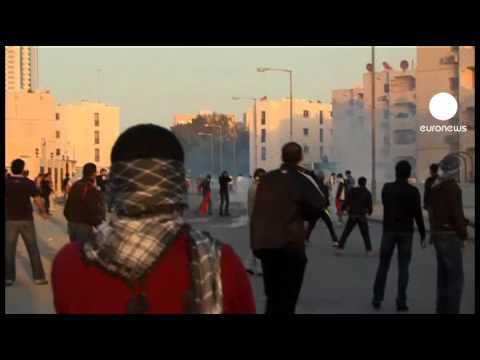 Last Friday, Iranian President Mahmoud Ahmadinejad expressed support for Egyptian protesters. “Despite all the [West’s] complicated and satanic designs … a new Middle East is emerging without the Zionist regime and U.S. interference, a place where the arrogant powers will have no place…” Yet on Monday, Iran reacted to its own street protests in a manner only the worst of the Egyptian secret police tried, on one or two days.

The Iranian security forces deployed tear gas, pepper spray and batons against the demonstrators. In some instances they opened fire, wounding protesters.

Thousands of Iranians demonstrated in the streets of Tehran on Monday, with a handful being wounded and at least one dead in the course of the regime’s crackdown. Protesters were attempting to revive the excitement and anti-government feeling of summer-fall 2009, when millions objected to the announced vote tallies that affirmed the victory of president Mahmoud Ahmadinejad.

Unlike in Egypt, where except for a day or two the Mubarak regime avoided direct physical confrontation of the demonstrators, in Iran the Basij, or volunteers for the Islamic Republic, attacked protesters on motorcycle and repressed them. Eyewitnesses said that dozens were jailed.

Meanwhile clerics in parliament called for the death penalty for demonstrators arrested at the scene.

Meanwhile, protests also broke out in Bahrain, where Shiite activists are protesting their marginalization by a Sunni monarchy, even though Shiites form two-thirds of Bahrain’s population. The US Fifth Fleet is based at Bahrain in the Gulf.

And in Yemen, 3,000 students, attorneys and activists demonstrated in the capital of Sanaa, demanding that long time strong man Ali Abdallah Saleh step down.

Mosaic TV does a roundup of Monday’s developments in the Middle East:

In Egypt, which inspired the current round of demonstrations, the martial law government pledged to have the constitution amended within 10 days, with the changes put to a national referendum within 2 months. Demonstrators had demanded that clauses disadvantageous to free and fair elections be removed or changed before polls are held, sometime before October.

In Algeria, where there have also been small demonstrations, the government is now saying it will lift the emergency laws through which it has ruled with an iron fist.