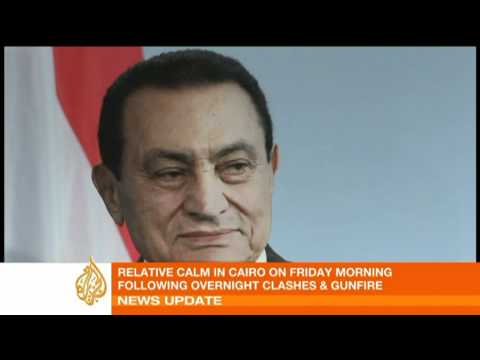 Anti-Mubarak Egyptians prepared themselves on Friday for a major campaign of street protests that they are calling not another “Day of Wrath” but rather a “Day of Departure,” an attempt to force President Hosni Mubarak to resign. By mid-morning thousands had already gathered at Tahrir Square in downtown Cairo and at other key nodes in the capital. I am watching Aljazeera Arabic early Friday morning ET (10:15 am in Cairo), and can hear them chanting “En-Nahar-da! En-Nahar-da”– Today! Today! Some are tweeting that they expect at some point the army may block further protesters from reaching the square. Some tweets from the ground are saying that today the army is on October 6 bridge turning back Mubarak’s goons and thereby protecting the protesters.

Crowds have gone beyond the demand for the exile of the dictator to chanting for him to be arrested and put on trial for the murders and assaults on peaceful protesters. Meanwhile, the NYT reported Thursday evening that the Obama administration is talking to the Egyptian government with a view toward pressuring Mubarak to step down immediately in favor of his vice president, Gen. Omar Suleiman, former head of military intelligence, who should then oversee a transition to a more pluralistic system with representation for Egypt’s political parties. (Actually the Egyptian constitution says the speaker of parliament should step in if the president is incapacitated). Senators John McCain and John Kerry successfully sponsored a resolution in the Senate asking for Mubarak to step down.

On Thursday, agents of the Mubarak regime had launched widespread attacks on journalists, in which 26 were beaten up and 30 were arrested, with 8 having their equipment seized. US cable news channels could no longer show live coverage. Egypt’s Ministry of the Interior, which oversees the country’s police and runs a network of neighborhood street gangs (baltagiya), is suspected by the US embassy of being behind the campaign against journalists, according to CNN. At one point on Thursday an Interior Ministry van was captured on video running protesters down.

I have a deep fear that the breaking of cameras, the closure of Aljazeera’s offices, the attacks on and threats against international journalists, were intended to blind the world to a planned atrocity against innocent, peaceful protesters on Friday. It may be that the strong condemnation of these moves by the US, Europe and others has made the Interior Ministry rethink any such plan.

The Mubarak regime on Thursday had also continued its attacks on the protesters at Tahrir Square downtown, deploying plainsclothes police, covert agents, and hired thugs in an attempt to take the square away from the dissidents. Although they attacked over and over again, they were unable to dislodge the demonstrators.

Iason Athanasiades,interviewed on Aljazeera, is reporting that the failure of the Interior Minister goons to chase the demonstrators from Tahrir Square despite brutal violence against them on Thursday has created increasing doubts in the military about the wisdom of attempting a bloody crackdown.

Mubarak also said he was sad to see the violence, in an interview with Christiane Amanpour. Without a trace of irony he said he was ready to retire but was afraid that if he stepped down it would cause chaos.

How stupid do they think we are? Mubarak, Shafiq and VP Omar Suleiman almost certainly sat down in a room and authorized the Ministry of Interior to try out that brutal assault on peaceful protesters.

Proof 1: The Interior Ministry in a dictatorship doesn’t go off on rogue missions; these things are tightly controlled from the top.

Proof 2: The regular army stood aside and allowed the goons to attack the demonstrators, allowing them through checkpoints for their murderous mission. Soldiers do what they are ordered to do.

But, what the apologies do suggest is that the government is attempting to distance itself from the Ministry of Interior tactics.

Adm. Mike Mullen on Jon Stewart’s Daily Show referenced Shafiq’s ridiculous ‘apology,’ apparently delivered precisely so that the wool could be pulled over the eyes of the public. The usually canny and astute Stewart did not challenge the absurd ‘apology’ meme.

In an attempt to mollify dissidents, the Shafiq government did move against some former high-level officials, freezing their bank accounts forbidding them to flee abroad. Those former cabinet members (until last week) included Interior Minister Habib Adly, Muhammad Zuhair Girana, former tourism minister, Ahmad al-Maghribi, the former minister of housing, and Ahmad Izz, former high official in the ruling National Democratic Party (the name of which is made up of three lies).

Iason Athanasiades on Aljazeera is speculating that loyalists to these figures in the Interior Ministry and among the street gangs it runs were behind Thursday’s attacks.

Anti-Mubarak demonstrations continued on Thursday in Daqahliya Province, where 5,000 dissidents and Muslim Brothers came out for rallies. In Suez, 3,000 oppositionists,including Muslim Brothers, joined protests. In Assiout in Upper Egypt, 4,000 Muslim Brothers and other political forces demonstrated, as did a similar number in El Minya. Thousands also came out in El Arish in the northern Sinai. About 100 pro-Mubarak forces attempted to attack the demonstrators in El Arish, but the army stopped them.

In downtown Cairo, this eyewitness and participant insists that the Muslim Brotherhood has played a minor role in the protests.