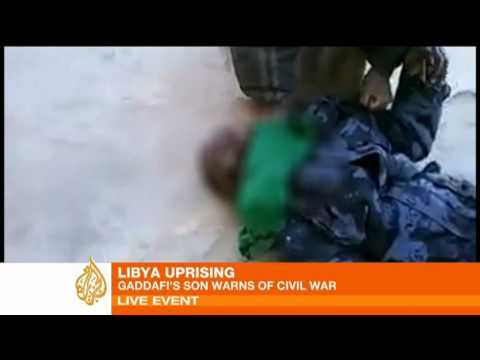 After the eastern Libyan city of Benghazi fell to the protest movement on Sunday, clashes broke out in the Libyan capital of Tripoli late that afternoon, the first time that city saw substantial demonstrations. The events shook the rule of Muammar Qaddafi to the core, eliciting from one of his sons Saif al-Islam Qaddafi a haughty jeremiad about the protesters endangering the future of the country.

Because Libya is an oil state that exports 1.7 million barrels a day, its fate has more immediate implications for the international economy than unrest in non-oil states such as Tunisia. On Sunday, the eastern Zuwayya tribe threatened to halt petroleum exports in protest of the brutality of the regime in Benghazi, a city of over 600,000.

Petroleum accounts for much of Libya’s $77 bn. a year gross domestic product, the 62nd in the world, which affords Libyans a per capita income on paper of over $12,000 a year, more than that of Brazilians, Chileans or Poles and the highest in Africa. In fact, the oil income is not equitably distributed, so that a third of Libyans live below the poverty line and 30% of workers are unemployed. The regime favors the west of the country with oil money largesse, neglecting the east.

This outbreak of clashes in the capital of Tripoli is important because governments are always most vulnerable in their own capitals, and because most of the 6 million Libyans live in the west of the country, where the capital is also located. Tripoli is a city of a little over a million. About 3 million Libyans, or half the country, live in the historic region of Tripolitania, including the capital and its environs. Populations along the North African coast hug the rainfall rich areas near the Mediterranean where agriculture is possible and there is potable water.

In a highly significant development, the leadership of the large and powerful Warfala tribe announced that it was now siding with the opposition against Qaddafi. About a million Libyans belong to this extended kinship group. Since cultivating tribal loyalties was one of the ways Qaddafi had remained in power, this major tribal defection underlines his loss of authority. It was further underlined when Arab Warfala leaders managed to convince their Berber counterparts in the southern Tuareg tribe, who are 500,000 strong, to join in opposing Qaddafi.

Tens of thousands of young people had come out to rally in Benghazi on Sunday. The regime initially tried to bully and intimidate the crowds, using live fire against them and in some instances even firing rocket propelled grenades at them. Dozens were killed. The state security forces are accused of deploying African and other expatriate laborers against the Libyan crowds, angering them on nationalist grounds. At length, some military units went over to the crowd, while one stayed loyal. The two engaged in firefights with one another. Lt. Gen. Sulaiman Mahmoud, formerly commander of the eastern region (historic Cyrenaica) eventually went over to the protesters.

All of these developments– the falling of Benghazi, the split in the military there, the defection of major tribes, and the outbreak of protests and violence in the capital– point to a revolutionary situation. Central to such a situation is dual sovereignty, the development of two distinct camps with authority in the same country.

Aljazeera English has a recent overview.