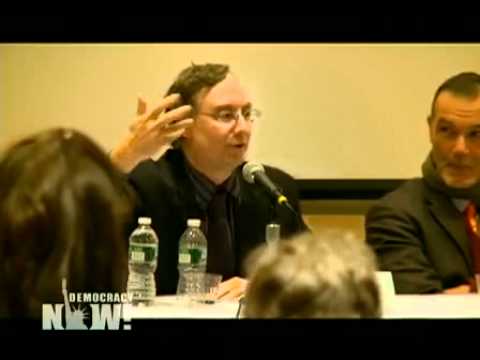 Hosni Mubarak is gone to the wild elation of Egyptian crowds. The country is now being run by a council of military officers. They say that they want a transition to a civilian elected government this fall.

What do the people who made the revolution want? I argued in Detroit News that this movement is at its core a labor movement. The constant drumbeat on Faux News that the crowds want a Muslim fundamentalist dictatorship is ridiculous. Egyptians are religious, but the keywords of the protests have been secular ones– elections, parliament, the people, the army, the nation (watan, the secular word for nation, not ummah, the religious community).

A communique issued by the “January 25” leadership is consistent with that finding:

* Repeal of the state of emergency, which suspends constitutional protections for human rights, immediately.

* The immediate release of all political prisoners

* The setting aside of the present constitution and its amendments

* Dissolution of the federal parliament, as well as of provincial councils

* The formation of an interim government comprising independent nationalist trends, which would oversee free and fair elections

*Removal of any restriction on the free formation of political parties, on civil, democratic and peaceful bases.

* Freedom of the press

* Freedom to form unions and non-governmental organizations without government permission

These demands are generally in accordance with the current state of human rights law in Europe.

With regard to abrogation of the emergency laws, the military appears already to have agreed in principle, and this move is backed by the Obama administration. Some of the other demands seem utopian, including writing a new constitution before new elections and the proroguing of the present parliament. Likewise, if the rulings of the military courts were abrogated, then at least some terrorists from the Egyptian Islamic Jihad would be freed. Though, since thousands of prisoners have fled their cells in the chaos of the past 2 1/2 weeks (and some may have been deliberately freed by Mubarak’s secret police in order to sow chaos), the issue may be moot.

I was asked at an event at Columbia University on Thursday night what likely lies ahead for Egypt now. My reply was recorded and played on Amy Goodman’s Democracy Now!

What I said was that it seemed to me that three major outcomes are possible:

1. The old elite of officers and businessmen around Mubarak survives him to remain more or less in power, and further protests over time are repressed.

2. There are new presidential and parliamentary elections, but the Mubarak cronies take advantage of their experience in organizing and the wealth they have gained from their crony status to dominate these institutions, while the officer corps remains a power behind the scenes.

3. There is a genuine social and political revolution, wherein substantial amounts of wealth and power are redistributed to new actors.

Samer Shehata at Georgetown was asked to reply to my scenarios. His responses are well informed and cogent, but he misunderstood my first point, which no doubt I expressed too telegraphically. When I said that there was a (relatively small) chance that the military regime in Egypt would ‘pull a Khamenei’ and manage over time to repress the reform movement, I didn’t mean that I thought the Muslim Brotherhood would take over or do the repressing. I was just talking about a model where massive street protests don’t necessarily actually produce a big change in the top political actors, i.e., in this case, where generals like Gen. Muhammad Hussein Tantawi (Minister of Defense) and Gen. Omar Suleiman (Vice President) remain high in the government, and where many familiar faces in parliament are again returned to office. Given the events on Friday I think the likelihood of this development is now even smaller.

I suppose I also don’t agree with Samer that the National Democratic Party is not better positioned to contest early elections than its rivals, especially the inchoate networks that represent the protesters. While the NDP may not be the best-organized party in the world, it still has advantages, having dominated parliament and provincial offices for decades, that its rivals lack.

But, in neighboring Tunisia the old ruling party of Zine El Abidine Ben Ali, the Rally for Constitutional Democracy (a descendant of Habib Bourguiba’s anti-colonial Neo-Destour or New Constitutional Party), has been dissolved. The same fate could befall the NDP, which would make it harder for its functionaries to dominate any new parliament. While parliamentary elections have been set in Tunisia, it is not clear when they will be held in Egypt. Presidential elections will be conducted this fall, but parliament was just elected in a clearly fraudulent process. The protesters are demanding that that parliament be dissolved and new polls for the national legislature be held. This step could be taken by the military council, but as far as I know that decision has not been announced.

While a thoroughgoing social revolution may or may not take place in Egypt with regard to property and capital (such events are rare in modern history), I do not mean to in any way diminish the importance of achievements such as the rule of law and constitutional liberties. If the demands released Friday by the protesters are even partially met, especially with regard to freedom of expression and of unionizing and party formation, Egypt will certainly be a very different and far more democratic place. Since it is an opinion leader for the Arab world, moreover, its example may well prove crucial in spreading these freedoms elsewhere in the region, even to Iran.