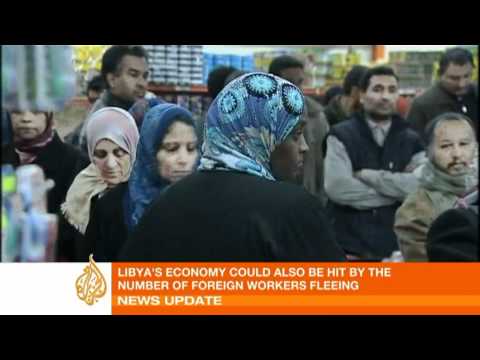 The question of what comes after Qaddafi became more complicated on Sunday, as rival claims to forming a provisional liberated government emerged. Former Justice Minister Mustafa Abdel-Jalil had announced on Saturday from Benghazi that he would head an interim government. But on Sunday human rights attorney Abdel-Hafidh Ghoga said from Benghazi that an interim government was being formed for all of liberated eastern Libya, and disputed Abdel Jalil’s claim of leadership. The new council will form a paramilitary to take further territory away from Qaddafi’s forces, Ghoga said.

Some 80% Libya’s developed petroleum fields are in rebel-held territory, and the Benghazi leadership is making plans to pump the oil and receive the proceeds. If the standoff with Qaddafi goes on very long, the oil politics could prove decisive. With Qaddafi’s own foreign funds increasingly frozen, and 3/4s of the country’s oil facilities idled (it ordinarily exports 1.7 million barrels a day), his cash on hand to pay mercenaries and bribe clients will rapidly decline, whereas the Benghazi rebels may reap a windfall. Reports about the situation at the oil fields are chaotic and contradictory, but it seems clear that some oil workers are pumping the oil themselves as expatriate companies flee, and it is possible that the Benghazi leadership could export by tanker truck despite the closing of the Italian pipeline.

The oil politics could also provoke NATO or other intervention. Although Saudi Arabia is pumping extra petroleum (500,000 barrels a day), it is probably not actually replacing what has been lost from Libyan production. Brent crude hit $114 a barrel on Sunday. The world is skating on the edge of petroleum prices so high that they could push the global economy back into recession. Will NATO governments really risk taking a bath in their next elections because they declined to implement a no-fly zone over Libya and bring a quick end to what is for them not only a humanitarian crisis abroad but also a potential oil crisis at home?

CBS Money Watch has a report:

The Effect of Libya and Gas Prices on the Recovery

More production may be lost, as unrest spreads in the Middle East. Iraq’s massive protests this weekend were followed by an attack on the refinery at Baiji, which closed it. The plant has a capacity of between 150,000 and 300,000 barrels a day (you see varying estimates). The spread of the protests to Oman, moreover, raised ominous questions about how much production may be lost. Not only have petroleum workers in the port of Sohar demonstrated, with 2 protesters killed, but they targeted the road used by tanker trucks. (They so far haven’t had an impact on pipeline exports, the bulk of them.) Workers in the Gulf unhappy with their lives, unlike Wisconsin school teachers, can fairly easily disrupt the economy if they choose.

Oman pumped some 860,000 barrels a day in 2010 and exported about 750,000 of it. If most Libyan production goes off line and Oman is similarly crippled, that would be a loss of about 2.5 million barrels a day– nearly 3% of the 85 million a day the world typically consumes, which is probably all the Saudis could cover even if they were willing and able to ramp up production that much for an unknown period of time. (Some critics question whether the Saudis can really pump that much extra petroleum for very long without putting strains on their equipment and infrastructure). Although a loss of 3% of export capacity may not seem very much, actually in a market where supply was just barely meeting demand, the loss could cause prices to skyrocket (especially because of the atmosphere of uncertainty the losses could provoke). The big kahuna would be disruptive protests in Saudi Arabia itself, which would certainly cause a global economic crisis.

Quite apart from production, a lot of petroleum refining is done in the Middle East, and were the world’s refining capacity to be reduced that might be more significant for supplies and prices than merely taking crude off the market temporarily. Oman, for instance, refines 200,000 barrels a day. Refineries take years to build and billions in investments. Raw petroleum is useless– it has to be turned into gasoline/ petrol, kerosene, etc., to drive vehicles– its main use. Increasing refining capacity is not nearly as easy to do in the short term as just pumping more crude.

So back to Libya. In newly liberated Zawiyah, half an hour drive west of the capital of Tripoli, rebels displayed their heavy weaponry– including tanks and artillery– to Western reporters and underscored their intent to take on Qaddafi’s forces. The Zawiyah liberation movement appears to be coordinating with Benghazi, now the epicenter of revolutionary politics. The city is significant because it is the site of Libya’s largest refinery.

Aljazeera English has video of Zawiya:

The dispute between Abdel Jalil and the Benghazi liberation council may signal more trouble ahead. Given that the former Tunisian prime minister, Mohamed Ghannouchi, has just been forced to resign because he served in the old, overthrown government, Abdel Jalil’s move was probably inadvisable. Even though Abdel Jalil was the first cabinet minister to resign in disgust at Qaddafi’s brutal use of force, and even though he offers some continuity at a time of upheaval, having a Qaddafi cabinet minister, especially one who had oversee Libya’s corrupt and oppressive ‘justice’ system, try to run the country now would be a recipe for further protests and upheavals. The rebels are talking about parliamentary elections within three months, which is, frankly, probably unrealistic. The pledge underlines the need for the United Nations to get officials into Benghazi to consult with the revolutionary notables about how to go forward, since the UNO has a lot of experience in these matters, which, to say the least, the leading lights of Benghazi do not.