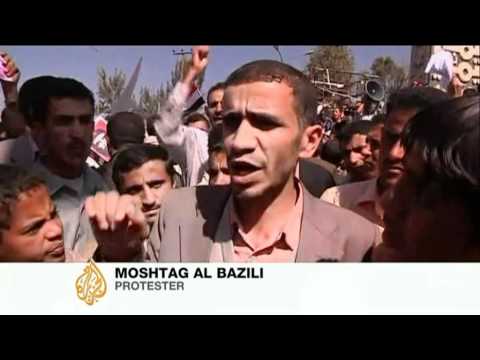 5. Thousands of protesters marched Sunday on the presidential palace of Yemen’s Ali Abdullah Salih, who has ruled since 1978. The United States has increasingly forged a relationship with the Yemeni military aimed at destroying the alleged al-Qaeda operatives in that country.

Aljazeera English has video on Yemen:

4. After 3,000 protesters came out in Algiers on Sunday, organizers announced that they would hold rallies every Saturday in their quest for the resignation of President Abdel Aziz Bouteflika.

3. Fearful of a Palestinian uprising against it, the Palestine Authority in the West Bank is instituting some reforms. Prime Minister Salam Fayyad has dismissed his entire cabinet in favor of a smaller, leaner body.

2. Clashes broke out Monday morning between police and demonstrators over the latter’s plans to hold protest rallies in Manama. Reuters has background.

1. Iran’s Green Movement and its plans for big rallies in Iran on Monday are raising regime fears that the Iranian Revolutionary Guards may split, on facing the prospect of attacking innocent civilians.

US interests are affected by each of these. Algeria is a petroleum producer, and supplies are tight, increasing the value of stability in each of the OPEC countries. Bahrain has a bit of oil but its main importance is as a US naval base. Yemen is an object of anxiety about al-Qaeda, with which Saleh has been cooperating. Iran is a major target of US foreign policy angst and any significant change there will affect the tenor of the debate in Washington.