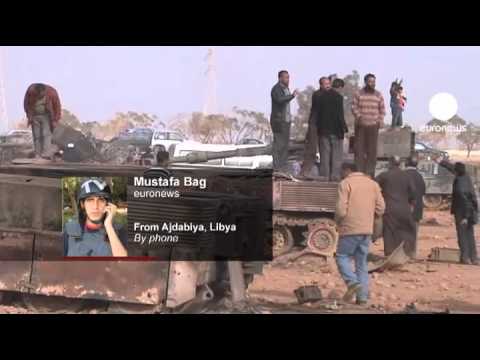 Friday saw major protests in Syria, Jordan and Yemen, along with continued fighting in Libya. The Arab Spring has not breathed its last gasp, but rather seems to be getting a second wind. Protesters are crossing red lines set by governments and risking being shot. They know that movements are watered with the blood of martyrs. One of the major protests, in Deraa, Syria, on Friday was actually a funeral procession. But the Baathist regime created dozens more martyrs in response to being challenged. Yemeni President Ali Abdullah Saleh seems to have admitted he is outgoing, though he is bargaining with the crowds about the timing and circumstances.

The Aljazeera correspondent in Ajdabiya south of Benghazi writes that liberation movement fighters were able to enter the city via the eastern gate, which they now control. They were helped by the bombardment of Qaddafi’s tank brigades by UN allies, which forced the dictator’s troops to withdraw to the western gate. The liberation movement killed 4 pro-Qaddafi troops and took a number prisoner, as well as destroying some of their weapons, including two tanks. For the first time in two weeks, the liberation movement was able to break the blockade of Ajdabiya imposed on the city by Qaddafi’s forces. Gen. Khalifa Haftar, who defected to the transitional government based in Benghazi, said that his fighters had only entered the city when negotiations with pro-Qaddafi forces aiming at allowing them to leave the city broke down.

Euronews has video from the Ajdabiya:

UN human rights experts are worried about hundreds of activists taken into custody and made to disappear by Qaddafi’s secret police.

Aljazeera Arabic is reporting a small demonstration in Cairo’s Tahrir Square in support of Libya’s liberation movement, demanding that it be protected from Qaddafi government brutality. Protesters also demanded that the Mubarak family and their associates be put on trial for corruption.

Meanwhile, UN allies bombed Libyan forces near Zintan, which they had been trying to take. On the other hand, Qaddafi’s tanks subjected Misrata’s downtown to a fierce bombardment lasting hours. Since the UN allies are reluctant to bomb tanks already inside cities for fear of civilian casualties, the armor inside Misrata seems to have felt itself out of danger.

In Syria, tens of thousands of people marched in the southern city of Deraa, in a funeral for protesters killed earlier by the government of Bashar al-Asad. Security forces are alleged to have killed 20 protesters on Friday. Protests spread to Hama and even Damascus. The crowds were not mollified by al-Asad’s pledge to lift the state of emergency and restore some civil liberties.

Thousands of protesters came out in Aden and other southern Yemeni cities to demand the resignation of President Ali Abdullah Saleh. In the capital of Sanaa, there were dueling demonstrations, with tens of thousands demanding that the president depart (they called Friday ‘the day of departure’), while another big crowd showed their support of him.

Saleh addressed his supporters, saying he would only step down after elections, such that there could be a clean transition. The speech was despised by the protest movement.

In Jordan, protesters were attacked by a pro-monarchy mob. Police intervened, mainly against the protesters, and one was killed. Nearly a hundred people were wounded. The protesters are demanding that King Abdullah II become a constitutional monarch.