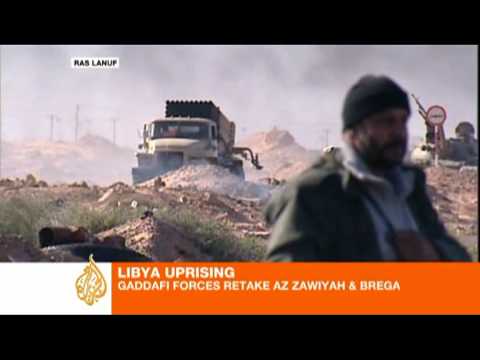 On Saturday morning, wire services are reporting that the Arab League has decided to back a no-fly zone over Libya. Earlier reports indicated divisions in the Arab League, as Libyan protesters demonstrated outside the HQ in Cairo. Secretary-General Amr Moussa was among those supporting the move. Even before the vote, he had told the German news magazine Der Spiegel, “”The United Nations, the Arab League, the African Union, the Europeans – everyone should participate.”

The report on the Arab League vote is also being carried by CNN but is not confirmed. It is not clear what mechanisms would be invoked to implement it. NATO states have insisted that a no-fly zone would need the authorization of the United Nations Security Council, where Russia and China are said to be reluctant.

On Saturday morning, pro-Qaddafi troops launched an assault on Misrata (Misurata), the city of some 600,000 due east of the capital of Tripoli, which has been in rebel hands for weeks. In the wake of government victories at Zawiya and Ra’s Lanuf, it is clear that the pro-Qaddafi military is hoping to parlay its momentum into complete control of the coast from the Tunisian border all the way to the eastern front, now at Uqail.

Qaddafi loyalists finally took the downtown square of Zawiya on Friday. The city is half an hour to the west of the capital, Tripoli, and was the last major stronghold of the rebels on the Mediterranean coast to the west. Reports indicate a massacre of the rebels, with the large mosque having been destroyed (it is customary for dissidents to take refuge in mosques, which traditionally were considered off-limits to violence), and rumors of bodies bull-dozed away.

Government forces also pushed rebels out of the eastern refinery town of Ra’s Lanuf to its east at Uqail.

On Friday morning I cautioned against seeing the see-saw fighting as sign of Qaddafi momentum, but after the events on Friday it seems indisputable that government forces have rallied effectively and are reasserting control over territory, pushing back the rebels.