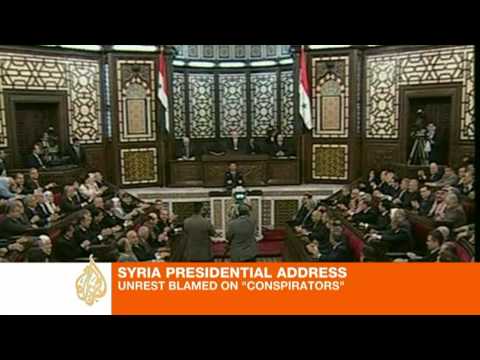 Syrian President Bashar al-Asad gave a major speech to the nation before his parliament on Wednesday, which largely disappointed the hopes of reformers . He declined to lift the state of emergency curbing basic civil and human rights that has been in place since 1963. He announced no specific reforms, but just talked about the necessity for some vague ‘reform.’ His language exemplified the paranoia of the typical one-party state. The protests were a ‘conspiracy’ provoked by ‘instigators.’ Some of the instigators were distant, some nearby (likely he meant the US and Israel).

Aljazeera English reports on the speech:

Protests in Syria began in a small way in Damascus on March 15. But the epicenter of the protest movement is the southern city of Deraa, where protesters came out beginning on March 18, with 4 of them shoot dead and dozens wounded that day. There were also protests elsewhere on March 18. On March 24 after a major anti-government rally, some 100 were allegedly killed in Deraa when police opened fire on protesters. The following day crowds in Deraa pulled down a statue of long-time dictator Hafez al-Asad, father of the current president for life. On March 26, crowds come out in the northern port city of Latakia. Near Deraa in a small place called Tafas, crowds torched the Baath Party HQ. On March 27, the government sents troops into Latakia, and some 15 were killed by security forces.

The speech did not mollify the crowds. Gunfire broke out in Latakia after it was delivered.

Aljazeera English has more on the reaction to the speech in Deraa and elsewhere.

Syria is a country of about 22 million. It is only about 3/4s Sunni Muslim. Some ten percent of the population is Christian, and 3 per cent belong to the esoteric Shiite group, the Druze. About 13 percent is Shiite of various sorts, including Allawis or Nusayris, Twelvers and Ismailis. Most of these are Allawis, a kind of folk Shiism that emphasizes a central role for the Prophet Muhammad’s son-in-law and cousing, Ali ibn Abi Talib.

The Baath Party in Syria is dominated at the upper echelons by the Allawi ethnic group. But there is strong Sunni support for the party in areas where it has done something for people, such as dams and irrigation works in the countryside.

Deraa is largely Sunni Arab and is suffering a persistent water shortage. Religious ethnicity is not irrelevant to the struggle, but economic and ecological discontents should also not be ignored.

Because the fundamentalist Syrian Muslim Brotherhood would likely do well in a fair election, many Israeli and US government officials prefer al-Asad to remain in power.

Turkey is also acting like a status quo great state in this instance.