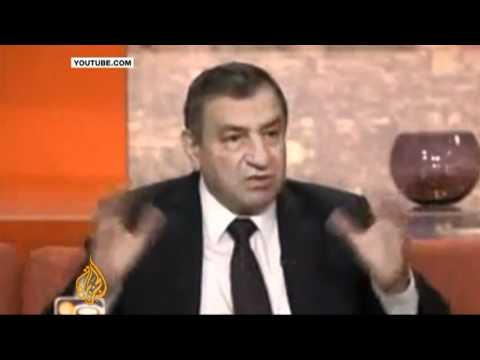 The threat of further massive protests today at Tahrir Square in downtown Cairo forced the resignation of Egyptian prime minister Ahmad Shafiq, a close associate of deposed president Hosni Mubarak and, like him, a former air force general. Shafiq was recently on television defending the secret police, which the protest movement wants abolished. The Egyptian military, which likely forced Shafiq out so as to avoid a confrontation with the people, announced the prime minister’s departure on its Facebook page, a homage to the protest movement’s favored medium of communication.

The new prime minister is Essam Sharaf, a former transportation minister who resigned in 2006 and who joined in the protests against Mubarak that began January 25.

Aljazeera English reports on the forced resignation of Shafiq:

Shafiq’s forced resignation follows on that of Tunisia’s Mohamed Ghannouchi, who had also been tainted by having been seen as too close to ousted strongman Zine El Abidine Ben Ali. In both Tunisia and Egypt, an initial success of protest movements in forcing out a long-serving dictator has been followed by gradual success in shaping a more neutral, technocratic cabinet that might oversee new parliamentary elections in a fair manner. In both countries, high political figures have been closely tied to mafia-like economic elites who misused their access to government insiders to engage in forms of insider trading and who marginalized outside entrepreneurs. Removing the exponents of a crony government is necessary not only to freer parliamentary politics but also to more social equity.

This process has gone farther in Tunisia, where censorship has been abolished, civil liberties have been restored, at least on paper, and the old crony ruling party has been dissolved.

In Egypt, protesters still want a lifting of emergency laws that suspend the civil liberties in the constitution. They also want the army to release protesters arrested during the movement to oust Mubarak, and they want the secret police to be abolished. They likewise demand accountability and the punishment of government officials who ordered the brutal crackdown on protesters that left hundreds dead.

Of all the protest movements in the Middle East this year, only those of Tunisia and Egypt have effected a change in the character of the political elite and set the nation on a road to open parliamentary elections. Jordanians who want a constitutional monarchy have seen few changes, though they did force the sacking of a hated prime minister. Ali Abdullah Saleh is still in power in Yemen. There have been no significant changes in Bahrain, an absolute monarchy ruled by a Sunni dynasty with a Shiite citizen majority. Oil workers seeking a better deal in Oman have not had their demands met. Iran’s autocratic theocracy responded to fears of a fresh round of protests by arresting opposition leaders. Algeria’s autocratic and corrupt government has so far quelled popular protests.

One big question is what will happen when a new government is elected in Egypt that springs from the ranks of the protest movement. Saleh in Yemen, and Abdullah II in Jordan, had depended on Hosni Mubarak’s warm support. It could be that further change in the region will come this fall, in part because of Egypt’s leading geo-political role (about 1/4 of the Arab population consists of Egyptians).