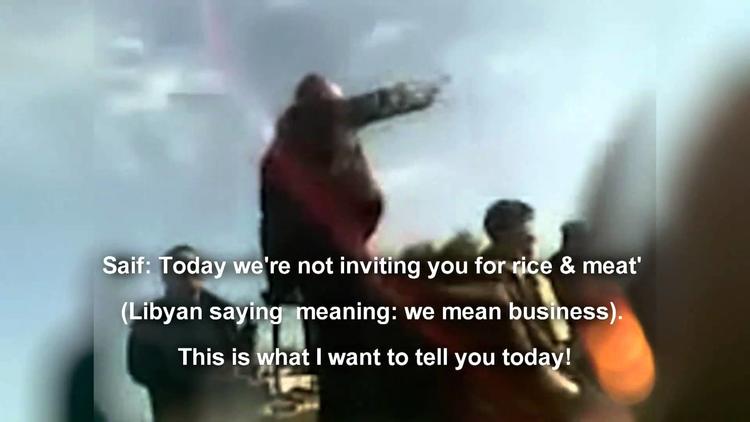 Saif al-Islam Qaddafi, son of the besieged dictator, has been caught on a smart phone video whipping up a crowd of ‘police’ and other supporters last Saturday to massacre protesters (he asks them ‘do you need guns?’ They shout, ‘yes.’)

Saif al-Islam Qaddafi had earlier given interviews in which he told Western reporters that there is nothing going on in Libya, everything is calm, everyone loves his father, and it is the media whipping up people and causing a potential civil war. Then later he accused the protesters of being al-Qaeda and terrorists. When Saif addressed the nation on t.v., his address was projected on a wall in Benghazi and people threw mounds of shoes at the image all the time he was speaking.

Another indication of the murderous and duplicitous character of the Qaddafi regime was that it sent a fighter jet to bomb a rebel-held air base at Ajdabiya, though the Tripoli government immediately deniedit . The BBC reporter in Libya, however, reports that the plane behaved suspiciously and did not in the end seem to bomb anything of value. This incident may be another indication that Qaddafi cannot actually depend on his officer corps, many of whom are probably looking for the first opportunity to defect.

Muammar Qaddafi even said there were no protests in the streets of his country, drawing a charge from US envoy to the UN Susan Rice that the old dictator is ‘delusional.’

British Prime Minister David Cameron’s hopes of convincing his allies to establish a no-fly zone over Libya to prevent bombings like the one on Monday are running into resistance from other NATO members, many of whom already feel militarily stretched in Afghanistan and who appear to feel that a no-fly zone might draw them into use of land troops, which most don’t have to spare (not to mention the expense, at a time when Western budgets are broken). Analysts concur that any such operation would be complex.

Aljazeera English has a video report on the state of play in Libya on Monday: