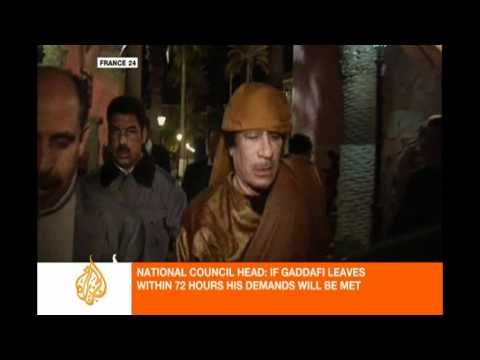 Muammar Qaddafi is still trying to play the al-Qaeda card, arguing that his murderous regime is what stands between Europe and the emigration to it of thousands of Muslim extremists. He told Turkish television that his regime is a key element of stability in the Eastern Mediterranean, and its fall would bring chaos there, including to Israel.

So, who knew? Qaddafi is the guarantor of Israel’s security and that of Europe? It is a desperate attempt to induce caution with regard the growing move in the West toward some sort of military intervention to prevent Tripoli from massacring the rebels.

Interestingly, Qaddafi’s language seems calculated to appeal to the far right in Europe and Israel, which views all Muslims as potential terrorists. It is an attempt to build a Qaddafi-National Front-Likud-Peter King front against the democracy movement in the Middle East. Qaddafi also sent an envoy Wednesday to the military council that is running Egypt. Since the pro-rebel tribe Awlad Ali dominates Salloum, the Egyptian city on the Libyan border, the rebels presumably are getting some supplies from their Egyptian allies. Qaddafi is probably keen to cut them off. His fear-mongering about al-Qaeda might have some purchase with right wing officers such as Omar Suleiman.

Aljazeera Arabic points out that the rebel forces, far from being “al-Qaeda,” are mostly disgruntled youth from major Libyan tribes such as Zintan. The keywords preferred by statements from such tribes are secular ones— the nation, the people, the army. Muslim fundamentalists speak of the “umma” or the ‘community of believers’ when they talk about the nation, whereas those imbued with civil discourse use terms like the ‘watan’ (originally a translation of the French ‘patrie’ or fatherland), and speak of ‘the people’ (sha’b) rather than ‘the believers.’ It is this civil language that the rebels speak, in all the communiques I’ve seen.

Pro-Qaddafi forces are being accused by residents of Zawiya, an important oil town to the west of Tripoli, of pursuing a scorched earth policy in the city, according to the BBC. Some 50 tanks and 150 armored vehicles are said to be indiscriminately wreaking havoc on the infrastructure.

Aljazeera Arabic is showing scenes, nevertheless, of defiant, chanting crowds in Zawiya during the past two days, at times dispersed by live ammunition directed at them by Qaddafi’s men. It is reporting as of early morning Wednesday that there are still resistance fighters in the central square of the town, which has not been completely subdued by forces from Tripoli. It remains mysterious as to why such heavy armored forces are having such trouble taking the central square; presumably they are facing heavy rocket-propelled grenade fire; the rebels have shown that they can kill tanks that way. An interviewee from Zawiya says by telephone that there are no phone lines and there is no internet in the city, and residents cannot now get out.

CNN’s intrepid Ben Wedeman reports that western towns like Zuara are under rebel control and are helping Zawiya.

Aljazeera Arabic is also reporting a major battle mid-day Wednesday at the gates of Ras Lanuf, including artillery duels, between rebels and pro-Qaddafi forces. Rebel forces continue to hold a position 20 km west of the town. On early Wednesday morning sounds of explosions and heavy fighting were audible in Ras Lanuf, continuing on and off subsequently. Presumably Qaddafi forces in the nearby town of Ben Jawad are also defending it from rebel attack. The rebel technique of continuing to advance on Ben Jawad and to threaten Qaddafi’s hometown of Sirt, i.e. of carrying the fight to the enemy, had probably blunted so far the ability of the pro-Qaddafi forces to attack effectively in Ras Lanuf, though it is subject to aerial bombardment. Aljazeera is showing film of a mosque in the city hit by an air raid, another piece of evidence pointing to a desperate, scorched-earth policy on Qaddafi’s part.

3News in New Zealand has an excellent report on the way the rebels in Ras Lanuf and to its west have gotten hold of some tanks and shoulder-held anti-aircraft missiles, and are showing not only more firepower but more discipline at the Ben Jawad front.

Aljazeera English interviews a spokesman for the Benghazi-based Libyan national council who insists that Qaddafi must leave the country but raises the possibility that the National Council would not pursue legal measures against him and his sons if he did depart.