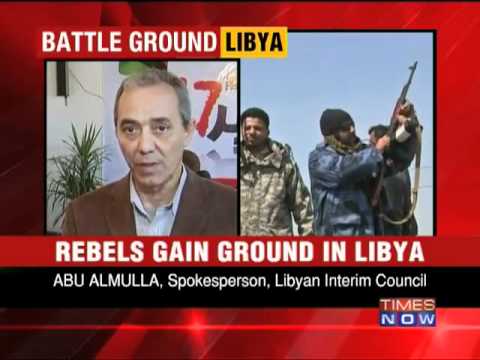 Irregulars of the Libyan liberation movement rapidly advanced along the coastal road going West on Sunday, reestablishing control over Brega, Ra’s Lanuf, Ben Jawad and, they say, going all the way to Sirt (no independent source confirms that they actually reached the latter by mid-morning Monday). The path was paved by British Tornado fighter jets that took out armor and artillery all along the road from Ajdabiya going west to Sirt. Though there were some military encounters, for the most part the rebel forces did not so much reconquer the cities as just drive unopposed into them, since allied bombing raids had softened them up, pro-Qaddafi forces had fled, and local people appear to have accepted the liberation movement soldiers without resisting them.

Sirt, the town of Muammar Qaddafi’s birth, which has been a recipient of much government aid, was bombed repeatedly by United Nations allies on Sunday, with one report talking of nine powerful explosions. Earlier on Sunday there were reports that Qaddafi’s military convoys were racing out of the city toward Tripoli. Mid-morning Monday, an Aljazeera Arabic correspondent reported being stuck and under government fire at Wadi al-Ahmar a few miles outside Sirt. This was the only clash the reporter had witnessed on the road up from Ajdabiya. But most pro-Qaddafi troops had fled. It seems that the pro-Qaddafi forces feared being devastated from the sky and took a chance that they would not be bombed if they were clearly fleeing the scene. It is interesting to me that they appear to have made a beeline for Tripoli rather than falling back to Misrata from which they could have hoped to make a stand. Of course, if the aim was to avoid being bombed, better to park your tank among civilian neighborhoods in the capital.

The recovery of Ajdabiya, Brega and Ra’s Lanuf gives the liberation movement forces an opportunity to begin pumping oil again and exporting it so as to gain resources in their struggle with Qaddafi. They probably cannot do so as quickly as they now suggest (a week!), but likely it is a coming factor in the conflict.

in contrast, I find the behavior of the Qaddafi tank brigade in Misrata closer to the capital to be hard to understand. Pro-Qaddafi tank commanders appear to be attempting to take the city center, and they subjected it to intense shelling on Sunday. But why is it they aren’t afraid of being reduced to black carbon dust by the NATO aerial bombardments, as happened to their colleagues at Ajdabiya and on the road west from there? Even if they could put tanks in the city center, what would they really have accomplished, in a situation where the rebel army is moving quickly west and would likely hit them with rocket propelled grenades once it arrives? Since most of Misrata obviously hates them, how could they think they will be allowed to stay there very long, just by main force?

In Tripoli, residents are suffering from a gasoline shortage that is disrupting economic life. Malta stopped a fuel ship on its way to west Libya, preventing it from making its delivery in accordance with the UN blockade of Tripoli.

The BBC reports that residents of Tripoli entertain the strongest reservations over the verity of official Libyan television reports, which they believe to be staged and false. They say there is a clip of loading supposedly injured bodies into an ambulance and you can see the ambulance medic sneering sardonically as the doors close (he thought he was already off-camera).