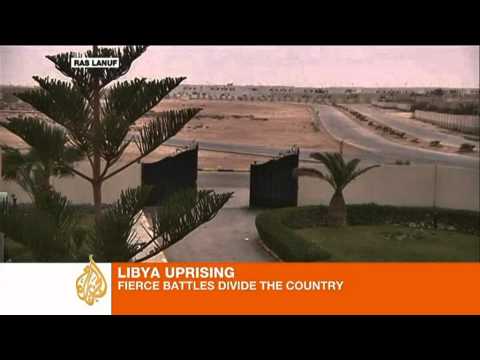 Libyan rebels advancing from the east along the Mediterranean coast, having taken the oil refinery city of Ras Lanuf on Saturday in fierce fighting, advanced further west and briefly took the small town of Ben Jawad. Early Sunday morning there were reports of pro-Qaddafi resistance in Ben Jawad, and by mid-morning Sunday, AFP was saying the rebels had been forced to pull back to Ras Lanuf.

Rebel-held Ras Lanuf began Sunday with quiet according to a BBC correspondent on the ground there, and rebels there appear to have succeeded in shooting down a fighter-jet sent by besieged dictator Muammar Qaddafi’s rump air force, using the city’s anti-aircraft batteries, which they had captured. Claims by officials in Tripoli that this and other towns had been recaptured by minions of the dictator were contradicted by reporters and other eyewitnesses.

The partisans of the liberation movement seem determined to go further and try to take the city of Sirt (Sirte, Surt) (pop. 135,000). The advantage here is that if they can conquer Sirt, they can link up with rebels who control Misurata (Misrata) (pop. 600,000), and so will control everything east of Tripoli. Since the eastern, working-class suburbs of Tripoli are not under control of the government, either, Qaddafi would be reduced to dominating only downtown Tripoli and some sparsely populated towns in the west.

The BBC is reporting heavy gunfire in Tripoli on Saturday night, suggesting that rebel forces are mounting attacks there on pro-Qaddafi positions. ABC Australia said there was constant heavy gunfire for hours in Tripoli on Sunday morning. The Qaddafi government is trying to muddy the waters with denials of fighting in the capital and ridiculous claims of recapture of far eastern cities. Qaddafi is clearly under siege.

AFP is reporting artillery barrages by Qaddafi forces against downtown Misurata, with a threat of heavy civilian casualties.

Back to the possible Sirt campaign. One difficulty is that much of the population of Sirt supports Qaddafi. A BBC interview with an Indian English teacher there describes large houses and highly literate people who benefited from the old regime, which, e.g., sited international conferences there.

Likewise, the rebels in Misurata face raids by pro-Qaddafi units from Tripoli, though these have been repelled before today. Giving Misurata a supply line and a contingent of reinforcements from the east would be a major benefit of reducing Sirt, from the rebels’ point of view.

It appears that the push to the west is being pursued by army defectors and small-town youth who are functioning as ‘men on the spot’ rather than being directed by a central rebel military command from Benghazi. And, indeed, there are reports that the Benghazi leaders are divided over whether such a rapid push west at this point is advisable. This analysis suggests that Qaddafi’s forces were weak and lacking heart in Ras Lanuf and Ben Jawad, though the subsequent reinforcements who counter-attacked mid-morning on Sunday were made of sterner stuff.

Partisans in the oil town of Zawiya to the west of the capital fought off two massive attacks on the city by Qaddafi military units, who deployed tanks and rocket-propelled grenades but were forced to withdraw when they lost dozens of fighters, according to Arabic wire services. This outcome indicates that the rebel forces holding the city have heavy artillery and tanks, a conclusion supported by BBC reporting. The difficult Tripoli is having in reducing Zawiya, even if it proves temporary, again indicates the weakness of the pro-Qaddafi military. Zawiya is cut off from reinforcements and supplies from the east, since it is on the other side of Tripoli, so the city’s self-defense is indigenous.

Aljazeera English reports on the battle of Zawiya and the fall of Ras Lanuf to the rebels.

The big battles this weekend have been over oil cities, since both sides in the civil war are seeking resources to pursue the fight.