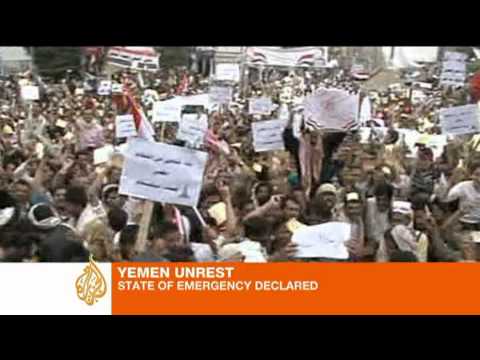 Thousands of protesters in Yemen mounted a massive protest in the capital of Sanaa on Friday, but ran into a trap set by government forces, which fired on them from rooftops and killed 46, wounding some two hundred. It is alleged that the troops set tires on fire and created walls of flame with gasoline, trapping the crowds and allowing snipers to fire into them as though they were fish in a barrel.

Thousands of protesters nevertheless stood their ground at what they have dubbed ‘Maidan at-Taghyir’ (Change Square, a pun on Cairo’s Tahrir or Liberation Square). Some invaded government buildings and laid hands on the snipers.

As news of the massacre spread throughout Yemen, thousands of protesters came out in provincial cities, as well.

President Ali Abdullah Saleh declared a state of emergency, as a member of his cabinet resigned in disgust, the first to do so.

Aljazeera English has video on the massacre.

Yemen, a country of 23 million, is the poorest in the Arab world. It is also among the least developed, with high rates of illiteracy and poor access to services such as electricity. It increasingly faces a water crisis.

The country is deeply divided. In the north it has Sunnis and Zaidi Shiites. In the south it has a lively workers’ movement at Aden and in Hadhramawt there is a mixture of tribal, Sufi and hard line Muslim fundamentalist groups. A sectarian group within the northern Zaidis, the Huthis, has waged a determined struggle against the government in its province. In Maarib in the south, al-Qaeda in the Arabian Peninsula (AQAP) has launched terrorist attacks and been bombed by drone by the United States. Neither violent revolt is probably related to the urban protests against Saleh’s authoritarian and corrupt government, which began as an Arab nationalist liberation movement spearheaded by the army. The protesters want jobs and civil liberties and an end to corruption. But Saleh and his supporters see the hand of extremist Zaidi Shiites in the north and of radical Salafis in the south in the unrest.

Reuters reports that the protest movement is now saying that it is impossible to compromise with the Saleh regime.

Yemeni newspapers and news websites on 16 and 17 March extensively reported on the anti-regime and pro-government protests in Yemen. The following is a roundup of reports as published by Yemeni papers and websites.

Sanaa Al-Sahwah Online in Arabic — News website of opposition Yemeni Reform Grouping, aka Islah Party; URL: http://www.alsahwa-yemen. net — on 16 March carries a 200-word report saying that regime’s thugs carried out a new “massacre” this afternoon against peaceful protesters in Al-Hudaydah Governorate. The report says that pro-regime supporters participated in a massive rally in support of President Salih when thousands of them retracted and chanted against the president. The report adds that more than 400 people were injured when the ruling party’s thugs used live ammunition and poison gases against the protesters. The report says that the thugs were supported by Special Forces, Central Security forces, and the National Guard. The report adds that the injured were taken to government hospitals where they were tortured.

Ma’rib Ma’rib Press in Arabic — Independent news website focusing on Yemeni affairs; URL: http://www.marebpress.net/ — on 16 March carries a 200-word report citing security sources as saying that security and high-profile figures in the regime are running a special operations room where they prepare for a massive attack against the protesters in Al-Taghyir Square in Sanaa. The security source is cited as saying that the Yemeni regime has imported advanced poisonous gases to use against the protesters. The report adds that other security sources have revealed that 45 youth were found in cells inside a Central Security camp in Sanaa. The report adds that these youth were kidnapped in the past few days against the background of the protests calling for toppling the regime.

Sanaa Al-Mu’tamar Online in Arabic — Website of ruling General People’s Congress; URL:http://www.almotamar.net — on 16 March carries a 200-word report saying that participants at the sit-in outside the University of Sanaa are calling on leaders of the Joint Meeting Parties, JMP, to help close what they call “illegal arrest office.” The report says that Abd-al-Karim Hasan al-Shaykh and Ibrahim al-Mu’ayyid, as well as others from the Yemeni Congregation for Reform, YCR, do the interrogation with citizens who visit the square outside the university. The report cites the youth as saying that Shaykh Muhammad al-Mu’ayyid’s son was chosen for the purpose of “making use of the torture techniques” practiced against his father who was detained in one of the “worst prisons in the United States.”

Ansarullah in Arabic — Pro-Huthist website, critical of United States, Israel; online dissemination point for the Huthist publications Nashrat al-Haqiqah and Mutaba’at Sahafiyah; URL:
http://www.ansaruallah.com/ar/ — on 17 March carries a 100-word report saying that eye witnesses have said that vehicles with army license plates are transporting thugs, security and army personnel in civilian clothes from various parts of Sanaa into Al-Taghyir Square. The report says that these people came from units under the leadership of President Salih’s relatives.

Sanaa Al-Mu’tamar Online in Arabic– on 16 March carries a 100-word report citing local sources in Al-Hudaydah Governorate as saying that armed groups affiliated with the JMP assaulted people who were participating in the pro-government “march of millions.” The report says that people and civil organizations in Al-Hudaydah Governorate warned the JMP against the repercussion of using thugs and armed elements against the people.

Sanaa Al-Masdar Online in Arabic — Website of independent weekly newspaper, critical of government policies; URL:http://www.al-masdar.com/ — on 17 March carries a 100-word report saying that at least eight people were injured when Special Forces and Central Security forces carried out an attack against the protesters in Al-Taghyir Square in Sanaa.

Sanaa Al-Mu’tamar Online in Arabic– on 16 March carries a 100-word report citing participants in the sit-in outside the University of Sanaa as saying that Huthist elements are supported by Shaykh Faris Manna, Yemeni arms dealer. The report says that Manna pays each Huthist element 5,000 to 7,000 riyals per day during sit-ins.

Sanaa Akhbar al-Yawm Online in Arabic — Website of independent daily newspaper featuring frequent reporting on Yemeni tribal affairs; URL: akhbaralyom.net –on 17 March carries a 200-word report saying that tens of thousands of people are still protesting in Freedom Square in Ta’izz Governorate until their demands are fulfilled. The report adds that 11 school girls were injured when the regime’s thugs assaulted them during their protest.

Naba News Online in Arabic (Pro-Government news website, harshly critical of secessionist efforts and the Huthist insurgency; URL:http://nabanews.net/–on 16 March carries a 700-word report saying that nearly 100,000 people, led by school teachers, staged a massive protest in Freedom Square in Ta’izz calling for toppling the regime. The report says that the number of protesters increased in the wake of an attack against school teachers to prevent them from joining the protesters. The report adds that hundreds of school students took part in the protests in Freedom Square for the first time.

Sanaa News Yemen Online in Arabic — Independent news website focusing on local affairs; URL:http://www.newsyemen.net/ — on 16 March carries a 200-word citing local sources in Al-Jawf Governorate as saying that the protesters are still controlling the government building for the third day.

Sanaa Al-Sahwah Online in Arabic –on 16 March carries a 300-word saying that a group of thugs threw stun grenades and used live ammunition in Al-Taghyir Square to scare the protesters in Dhamar Governorate. The report cites protesters as holding the governor responsible for the acts of bullying against the protesters.

Sanaa News Yemen Online in Arabic– on 16 March carries a 200-word report saying that military personnel in military uniform have joined the protesters in Sanaa, Ta’izz and Ibb, calling for the downfall of the regime. The report adds that the soldiers receive warm welcome when they arrive at the squares.