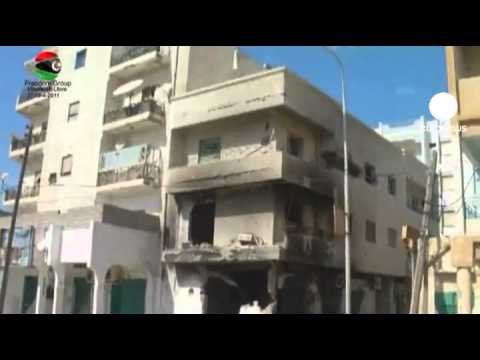 French President Nicolas Sarkozy, British Prime Minister David Cameron, and US President Barack Obama are publishing a joint op-ed in three newspapers on Friday in which they make it clear that the UN allies will not permit Muammar Qaddafi to remain in power, after what he has done to his people.

Muammar Qaddafi’s forces on Thursday launched an intense, hours-long bombardment of Tripoli Street in Misrata, killing some 20 persons. On Aljazeera Arabic, Misrata residents were interviewed about the attack, and they maintained that the bombardment was indiscriminate and that women and children are among the dead. Some eyewitnesses spoke of victims being killed while they were sleeping in their beds.

Meanwhile, the Benghazi leadership continues to plan peaceful protests in the capital, Tripoli:

The USG Open Source Center translates a radio broadcast from the ‘Voice of Free Libya’ in which civilian crowds are urged to come out on Friday in Tripoli.

We, the 17 February revolutionaries in Fashlum, Suq al-Jum’ah, Aradah, Bu-Salim and Tajura (all in Tripoli), have met to announce the following: We are fully committed to continuing this revolution until we restore our stolen freedom and dignity. This cannot be done without the tyrant stepping down and his family and mercenaries leaving Libya. (Passage omitted)

We also announce our total support for the Interim National Council (INC), the sole representative of the Libyan people, and call for intensifying air strikes on Al-Qadhafi’s brigades until the tyrant and his aides flee.

Friday (15 April) will be a day of mass protests that will be launched from major mosques in Tripoli. The Israeli way used (by Al-Qadhafi), including overnight raids on homes and the random kidnapping of youths and children, will be of no use in attempting to drive a wedge between Libyans and make them believe that there are many traitors in their midst…

We also announce to the Arab and Islamic world and to the international community that we in Tripoli do not have weapons and that our protests tomorrow will be peaceful.

Meanwhile, as NATO bombarded Tripoli on Thursday, Muammar Qaddafi braved the traffic of the capital: