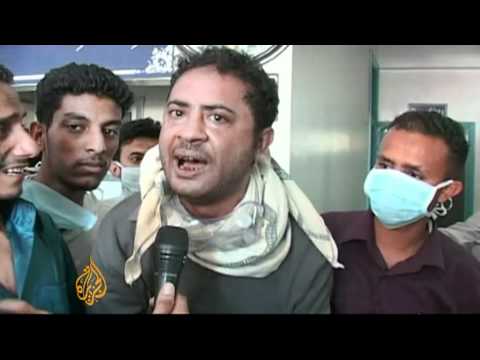 1. Tens of thousands of protesters are said to have come out in the Yemeni city of Taizz on Monday, but were fired on by security forces, who killed 11 and wounded 500. This according to CNN. Protesters also rallied in Sanaa, Aden, Ibb and Hodeida. Ta’izz, a city of 460,000, lies in the southwest of the country. Protesters insist that President Ali Abdullah Saleh step down in favor of his vice president, Vice President Abdu Rabu Mansour Hadi, who should preside over a transition to free and fair elections. The Obama administration has finally decided that Saleh must go. Is that imperialism or supporting reform? You decide.

2. As protests continued in the Damascus suburb of Douma— with thousands of people chanting for ‘freedom’ on Sunday and mourning protesters killed earlier– Syrian President Bashar al-Asad appointed a new technocratic prime minister. Some of Syria’s protests, as at Deraa in the south, have had to do with poor state management of water provision, and the new PM Adel Safar had been agriculture minister in the old cabinet. In the meantime, the radical Palestinian group Hamas, based in the Gaza Strip, came out in favor of Bashar al-Asad continuing in power.

3. The hardline Sunni government in Bahrain has banned the country’s only independent newspaper, al-Wasat. It stands accused of libelling the nation. Meanwhile, a prominent Iranian lawmaker called on Saudi Arabia to apologize for sending troops to Bahrain to aid in a crackdown on protesters.

4. Pro-Qaddafi forces continue to shell civilian facilities such as medical clinics in Misrata. Those who have escaped the city speak of a ‘massacre’ there by Qaddafi forces, with bodies in the streets. Water and food are scarce.

See also this clip, which says that in just the past week Qaddafi’s forces have killed 160 persons, or nearly 23 a day; another eyewitness speaks of ‘dozens’ killed daily: