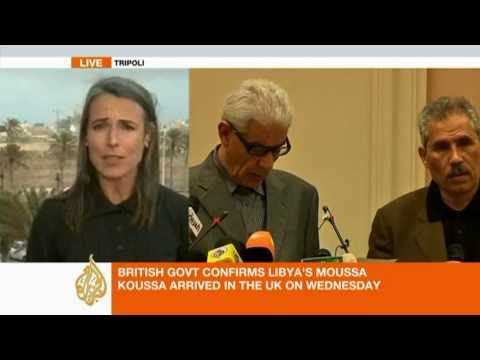 The United States is ending its active involvement in the UN-authorized air raids to stop dictator Muammar Qaddafi from massacring dissidents. NATO says it is against arming the rebels or fomenting a civil war. The slow, cautious war of attrition from the air against Qaddafi’s forces that undertake attacks on civilians in rebel-held cities will continue. Qaddafi’s closest associates are fleeing from Tripoli in terror of being held accountable for his crimes against humanity when his regime ultimately falls.

Some of these developments on Thursday drew howls of outrage from hawks such as Senators John McCain and Lindsey Graham, which is how you know that they are promising developments. It is better that the intervention in Libya not be branded a US one, but rather be seen as the effort of the 28 nations of NATO plus the Arab League. It is true that the US is a big part of NATO, but it doesn’t have to be a big part of the air war. (One of the reasons President Obama authorized covert operations in Libya is that US personnel are trained in painting lasers on targets for precision aerial bombing, which will allow NATO and UN allies to be more effective.)

The news that the disorganized civilians who picked up a gun and drove to Brega and Ra’s Lanuf last week are being pushed back by the Libyan military is not actually interesting, surprising, or indicative of the way the intervention in Libya is going. The push-back was only possible because weather made it difficult for NATO to do any bombing raids in the past few days, exposing the untrained rebels to superior firepower and the maneuvers of trained troops. The weather will improve, and the bombing raids will resume, and Qaddafi will have fewer and fewer heavy weapons over time. Those who wanted to see 1500 rebels sweep in from the east without air cover are being unrealistic, and also unwise. It is better if there isn’t an eastern conquest of the west.

The defection of Libya’s foreign minister, Moussa Kussa came after he and other regime elements around Muammar Qaddafi were threatened by US assistant secretary of state for Near Eastern affairs, Jeffrey Feltman, with being “held accountable.” This defection demonstrates that the UN-sanctioned intervention in Libya is already yielding fruit in splitting the elite around Qaddafi in Tripoli and inspiring in some of them the fear of being tried for war crimes. The first few to act on this fear will defect. Later on, they may well be numerous and powerful and desperate enough to put the Qaddafis under chloroform and just drive them to the airport and wish them a bon voyage to Caracas.

Aljazeera English reports that 4 or 5 other senior Libyan officials appear to have fled to Tunisia or Egypt and do not intend to come back, including the current head of Intelligence, the Oil Minister, the deputy foreign minister, and the head of the people’s congress. (The Intelligence Minister subsequently appeared on state t.v. to deny this claim, but the others are unanswered so far).

This truly great AP article by Hadeel al-Shalchi and Lee Keath explains that the significance of Kussa’s defection lies in its being a sign of the winds shifting against Qaddafi with his inner circle, which will affect the loyalty of his outer circle of tribal leaders. Many key members of the powerful Warfalla and Megarha tribes have already declared against Qaddafi, and Firjan and others are wavering. Tribes as loose systems of kinship politics, are volatile and fluid, and their allegiances can change rapidly. (Americans might remember that many members of the Dulaim tribe in Iraq fought tooth and nail against US troops in 2004-2005 but by 2006-2007 many were joining pro-American militias, the ‘Sons of Iraq.’) The tribes could turn on Qaddafi in a second, aside from his own and a few loyalists.

In announcing the end of US bombing raids in Libya, Gates “noted that the air attacks are a central feature of the overall military strategy; over time they could degrade Gadhafi’s firepower to a point that he would be unable to put down a renewed uprising by opposition forces…”

That is, Gates hopes that over time, Col. Muammar Qaddafi will simply have fewer and fewer tanks, artillery pieces, and armored vehicles. He has already lost the ability to bomb Benghazi and other cities from the air.

Gates’s premise seems to be that most Libyans don’t want to be under Qaddafi’s rule, and that the only way he subdued Zuara, Zawiya, Tajoura, Ra’s Lanuf, and other cities that had thrown him off was by main force. When his main force is subjected to sufficient attrition, his advantage will suddenly disappear and the opposition to him of the liberation movement will suddenly cascade. I don’t personally think that this cascade requires military means. It happened once largely peacefully, as in Egypt in Tunisia, and can happen again if Qaddafi’s heavy weapons can be neutralized.

People who want the attrition of Qaddafi’s forces to be visited in only a week or two are just being unrealistic. It would happen over weeks and maybe months.

In the meantime, the UN allies (NATO and the Arab League) have as their most urgent mission the protection of Benghazi from any major attack, which can be done aerially.

What bad thing would happen if NATO and the Arab League just proceed deliberately and with patience?

Impatience makes for bad policy. Those who urge Western military troops the ground are making a huge error– that development would never be acceptable to most of the Libyan people nor to the Arab League, nor to the majority on the UN Security Council.

Others of the tribe of the impatient want to put sophisticated weapons in rebel hands. Those who think the US or NATO should arm the rebels, however, are simply paving the way for a civil war and for a long-term cycle of violence. Having a rebel army conquer reluctant cities like Sirt, which still support Qaddafi in the main, is undesirable. Let pro-Qaddafi cities alone. The main task should be to protect the anti-Qaddafi populace from his attacks.

NATO agrees. NATO Secretary-General Anders Fogh Rasmussen said Thursday that his organization differs with those who have suggested that UNSC Resolution 1973 allows the arming of the rebels. In other words, NATO’s leadership concurs with the column published here yesterday by John Torpey.

US Secretary of Defense Robert M. Gates clearly has a model in his mind somewhat like Serbia in 1999-2000. In spring 1999 Serbian leader Slobodan Milosevic sent troops into Kosovo, which began committing a massacre. NATO intervened to roll that back. During that war, Milosevic was indicted at the International Criminal Court for war crimes.

Milosevic’s attempt to tinker with the presidential election of October 1999 provoked massive street protests against him. His military informed him that they would not support him. By spring of 2001 he was arrested by his own people and that summer he was surrendered to the United Nations.

NATO’s aerial bombing missions were what stopped the advance into Kosovo of Serbian troops. But it was the world community’s relegation of Milosevic to pariah status that helped the Serbian elite turn against him.

The International Criminal Court has been charged by the UN with looking into whether Qaddafi can be charged with crimes against humanity (and if not he, who could?) The ICC seems likely to return an indictment before too long. Such indictments have powerful real-world effects, as seen with Milosevic. Although this development might make it more difficult to find a place of exile for the Qaddafis, it would almost certainly hasten the fracturing of the Tripoli elite and an end to the conflict.

The Libyan conflict could never have been resolved militarily. It will wind to its end over time because of political shifts. Kussa’s defection is not the first from Qaddafi’s inner circle, and it won’t be the last.