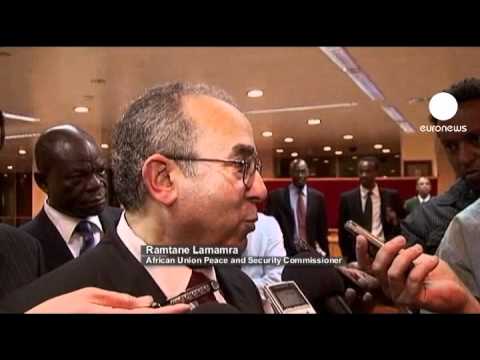 CNN’s Ray Sayeh intrepidly reports from Misrata on the further shelling its port area took from Qaddafi brigades on Wednesday. Those loyalist brigades have been pushed out of the center of the town by the Free Libya forces, but they are still able to sit in the western suburbs and to target the port area. The Qaddafi Brigades have seen their numbers and equipment attrited by repeated NATO air strikes on their positions as they have indiscriminately fired into crowds. There appears to have been an unfortunate friendly fire incident at Misrata on Wednesday, in which a NATO bombardment accidentally hit Free Libya forces and killed 12. Such friendly fire incidents are highly regrettable but almost inevitable where air support is being offered to irregulars.

Euronews reports on Misrata on Wednesday

On Wednesday, Free Libya forces in Zintan in the Western Mountains region, managed to push Qaddafi brigades back from the city after they had subjected it to heavy GRAD fire.

Meanwhile, a petition asking dictator Muammar Qaddafi to step down, from members of Libya’s 61 major tribes, was published in Paris by Free Libya supporter Bernard-Henri Levy. Al-Hayat says that the signatures include Miftah Maatuq al-Warfali, the leader of the Warfala tribe, who is based in Bani Walid near Misrata. There are a million members of the Warfala tribe, so if this is true it is big news. But Levy admits that some tribes are divided and so presumably some of the signatures are not by the paramount leader but merely by an anti-Qaddafi notable of the tribe.