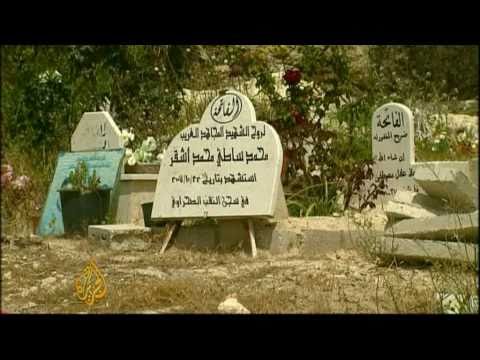 Israeli television has shown shocking cellphone video of the October, 2007, actions at Ketziot Prison, against unarmed Palestinian prisoners, by Israeli security forces. The thousand or so prisoners there revolted at a provocative search abruptly conducted by “Control and Restraint” units or Metzada. Far from being menacing, the Palestinian prisoners are shown cringing and obeying orders to come out of their tents with a promise that the shooting would stop. It did not. Israeli soldiers are caught laughing at the helpless Palestinian prisoners during the aggressive action.

The video is on the Web here.

An interview with an inmate was broadcast by The Real News in 2007 soon after the Israeli attack:

B’Tselem was already charging in 2007 that abuse and even torture of Palestinian prisoners in Israeli prisons was all too common.

The Israeli excuse for the killing and injuring of the prisoners was that they were menacing, but the video does not bear out this charge. Indeed, this excuse for belligerence is inscribed at the national and geopolitical level on Israeli foreign policy. See Ira Chernus today on “The Great Israeli Security Scam” at Tomdispatch.com.

Ketziot was the prison camp for Palestinians at which Cpl. Jeffrey Goldberg, now advertising himself as an objective journalist at The Atlantic, had served while on active duty in the Israeli army.

Since Israelis deprive Palestinians of the right to citizenship in a state, in essence all Palestinians are more or less in prison. Israelis expelled some 700,000 Palestinians from their homes what is now Israel in 1947-48, and displaced more in the 1967 War. Israeli national mythology attempts to erase this foundational crime and to deny the very existence of the Palestinians, of whom there are now some 11 million.

Citizenship is the right to have rights. Palestinians are stateless and without citizenship, and therefore have no sure title to property and no guarantee against being treated harshly and arbitrarily by the Israeli military authorities who rule over them. The so-called ‘Palestine Authority’ has no control over the land, sea or air of Palestine, which is itself disappearing into large Israeli colonization projects. The Palestinian noncombatants in Gaza are under an illegal blockade intended, according to wikileaks cables, to keep them on the edge of starvation without actually letting them die of lack of food. Palestinians are not allowed to export made goods from Gaza, by their Israeli prison guards, which is an act of illegality; military occupiers are not allowed to inflict collective punishment on civilian non-combatants as a war strategy..

Israel has many positive accomplishments to its name, but its policies toward the Palestinians are a national tragic flaw. Israel cannot become a normal, really successful society until it lets Palestinians have statehood and popular sovereignty. We have lived to see the day when Baathist Syria is treating its Kurds better than Israel is treating the Palestinians under its rule.