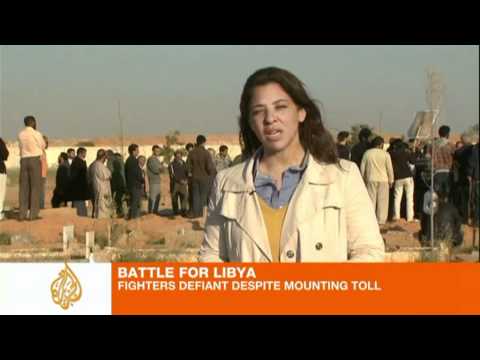 Misrata, a city of several hundred thousand people about 150 mi. east of the capital of Tripoli, is under, and for weeks has been under siege. Qaddafi’s strategy is to starve it out, deprive it of essentials, and bomb it indiscriminately, as a way of defeating its esprit de corps an allowing a pro-Qaddafi takeover. Qaddafi clearly thinks that the NATO no-fly zone becomes useless if he occupies all the significant cities in the country, then hides his tanks in the conquered cities. Moreover, if he can take Misrata, that victory would free up men and weapons for deployment against Benghazi itself. Qaddafi’s indiscriminate bombardment of the civilian city, and his blockade on food, water and medicine, is a crime against humanity.

Benghazi is sending some aid by sea on fishing boats which are protected by NATO naval forces. But Benghazi itself is suffering from shortages.

More from France24 on the defense of Misrata.

BBC Arabic reports that rebel sources say they repulsed two attacks by Qaddafi forces on Misrata, Libya’s third largest city, in which the Tripoli military brought up heavy artillery (and likely GRAB rockets) with which to bomb the city center. Meanwhile, NATO says its planes destroyed 5 tanks attacking the city.

Reuters Arabic reports that Nouri al-Ibar, who coordinates aid from Benghazi for Misrata, said that many residents of the latter are dying because of a medicine shortage in the city.

Egyptian refugees from Misrata are saying the city is being subjected to ‘indiscriminate’ bombardment, which is a war crime.

Qaddafi is also bombarding Ajdabiya without regard to civilian life:

Radio Free Libya reports that the Benghazi government rejected African Union mediation because the terms it offered were unacceptable. Rebels say that no peace plan can succeed if it does not involve the departure of the Qaddafis, and that the withdrawal of his forces from major cities must precede the declaration of a cease fire.

Benghazi Voice of Free Libya in Arabic on 11-12 April continued to air criticism of the peace plan for Libya proposed by the African Union (and the one put forward by Turkey) for failing to guarantee that Al-Qadhafi and his sons would step down, though one presenter said this did not mean that all mediation efforts would be rejected.

On the evening of 11 April, the radio carried a Koranic recitation and an unidentified announcer praying to God to make the rebels victorious and “destroy our enemy today”, citing examples of God’s support for various prophets against their enemies. “O Lord, make us victorious over those who oppressed us… O Lord, save us from those oppressors.”

The presenter then touched on the Palestinian issue, rejecting the term “roadmap” in the context of the Turkish and African mediation efforts, saying: “We first heard the term ‘roadmap’ in regard to Palestine some years ago. This roadmap was devised by some Western leaders who failed to implement it, despite its harsh conditions against the Palestinians. The (Middle East) Quartet (UN, US, EU and Russia) has failed to implement it up to today due to the obstinacy of the Jews, in spite of all the concessions offered by the Arabs.”

“We do not see any good in this (latest) roadmap proposed by Turkey, or rather the Turkish prime minister, and those African leaders, with due respect to our guests, as long as it fails to include the stepping down of the tyrant, his sons and aides.”

The radio reported the arrival that day (11 April) of the African mediation delegation in Benghazi, saying that hundreds of demonstrators gathered outside their hotel to express “their rejection of any settlement that does not include the stepping down of Al-Qadhafi and his sons”.

It said: “The (Interim) National Council (INC) stressed its rejection of a cease-fire before the withdrawal of the terrorist brigades, the departure of Al-Qadhafi and his sons from power and giving the people in the areas under their control the right of unconditional expression of their opinions.”

The radio aired what it said were recorded interviews conducted by its sister “Voice of Free Libya” radio station in Misratah “with some deceived personnel of Al-Qadhafi brigades who were pushed into the furnace of a losing war against their brothers and families in Misratah as they were arrested by the revolutionaries.” A presenter said this aimed to show “how horrible what Al-Qadhafi is doing against the Libyan people.”

One prisoner who introduced himself as Muhammad Muhammad al-Sharif from 7 April brigade, said “they brought me here from Misratah with 35 people… They handed us over to a colonel called Shihatah.” He hailed the rebels’ treatment of prisoners.

A female announcer presented a press review from a variety of newspapers, including Libya Al-Yawm.

At 1040 GMT on 12 April, a female presenter discussed “the means that tyrants follow when they feel that defeat is approaching”.

“When tyrants feel that defeat is approaching, they resort to deception and evasion. These are the last cards that are being revealed now; a mediation whose price the tyrant is paying in advance now. He is dispatching his agents here and there to mediate anew for his stay. Once again he is tampering with Libya’s wealth. He and his sons are looting as they want without supervision or accountability. Once again they are arresting, killing and torturing prisoners. This is what Al-Qadhafi is doing… The Turkish mediation comes, then it is followed by the African mediation. His safes are still full of the people’s money that makes him able to pay to remain anew on his fragile seat of power.”

“We should listen carefully to all those who want to mediate… We do not reject all mediation, but we will listen to what they are going to say… We, the free people of Libya, can now dictate our demands.”

At 1100 GMT, an unidentified woman announcer read a poem by poet Ahmad Matar. The radio then carried the Dhuhr call to prayers. Then a presenter read two more poems…

At 1145 GMT, an unidentified announcer introduced someone called Idris from Al-Marj to discuss “a demonstration to be staged today to support the Doha initiative.” Idris said the demonstration would stress that the first condition in any initiative should be the stepping down of Al-Qadhafi.

At 1215 GMT, an unidentified announcer held a telephone interview with Salih from Ajdabiyah and asked him about the situation in the city, Salih said: “Everything is fine… The (rebels’) national army is well positioned on the western side… Coordination is better than before… A simple skirmish took place 15 minutes ago away from the western gate of the city… Most of the population is outside the city. Those in the city are mostly revolutionaries.”

The announcer thanked Al-Jazirah TV for its coverage. He warned of “infiltrators in Benghazi and elsewhere who create problems.”

The radio broadcast a newscast at 1300 GMT. Items included:

“In eastern Al-Zintan, the terrorist brigades burnt the buildings and houses deserted by their owners.”

“In a statement released today, the caretaker transitional council in Naffusah Mountain expressed its rejection of all initiatives that fail to provide for the departure of the tyrant and his sons from power in Libya.”