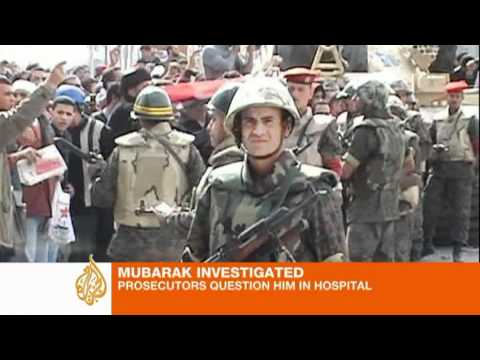 Al-Ahram is reporting in Arabic that Gamal and Ala Mubarak, the sons of deposed dictator Hosni Mubarak, have been arrested and will be moved from Sharm El Sheikh to the maximum security Tura prison in the Muqattam hills above Cairo. They are said to have sat stunned and silent for some time on receiving the news. They will be held for 15 days while the office of Egypt’s chief Prosecutor interrogates them about their possible role in ordering secret police to attack nonviolent protesters during the rallies that began January 25. Nearly 900 persons are now thought to have been killed in the various attempts at crackdown by the Amniyyat al-Dawlah or security police.

The Mubaraks had put many of their critics in Tura prison and had them abused or tortured, including Saad Eddin Ibrahim, the sociology professor and democracy activist.

Hosni Mubarak himself is in hospital at Sharm El Sheikh after he had heart palpitations during the prosecutor’s questioning session. He was well enough Wednesday to answer further questions. It is said he will be moved to a military hospital in Hada’iq al-Qubba in Cairo and also held for 15 days for questioning about the massacres.

The Mubaraks are also accused of corruption, and of making their cronies into billionaires by trading on insider information on government economic policy, as well as amassing billions of dollars themselves through corrupt techniques such as demanding kickbacks from companies doing business in Egypt. Gamal Mubarak had been heading up the ruling party, the National Democratic Party, a major vehicle for Mubarak patronage, which has not been dissolved.

Some 100,000 Egyptians rallied at Tahrir Square on Friday, demanding that the Mubaraks be put on trial. The army cleared remaining protesters, killing 2 on Saturday.