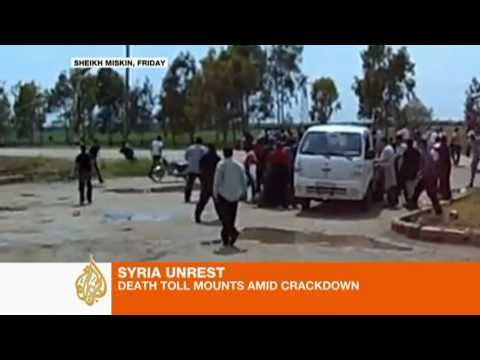 Since Muslims gather on Friday afternoon for group prayers at mosques, Fridays have for 1400 years been a time when it is easy to mobilize crowds for political action. In the US, Friday is a nothing news day and in fact bad news is released late on Friday on the theory that no one will bother to notice it. But in the Middle East, a lot of news happens on Fridays. Here are some of the big stories generated by 4/29:

1. Thousands of protesters defied a ban on rallies in Syria on Friday, in Deraa in the south, Banias on the coast, Homs and Hama in the center of the country, Qamishly in the Kurdish east, and 10,000 came out in Damascus itself. Security forces are said to have killed 62 persons yesterday. Mind you, all this activity came after the regime had already sent in tanks and snipers and made it clear that it would use live ammunition to repress the protests. Deraa has been occupied by units of the fourth and fifth army divisions, and nevertheless residents of surrounding small towns walked into the besieged city to protest the crackdown and deaths there; 15 were allegedly killed.

2. In Yemen, enormous duelling demonstrations were held in the capital of Sanaa. Tens of thousands of protesters marched up a main thoroughfare demanding the ouster of President Ali Abdullah Saleh. Elsewhere in the city, tens of thousands of his followers demonstrated in favor of the president’s legitimacy. In the Red Sea port city of Hodeida, protesters were fired at by security forces, and several were allegedly killed. There was also a big demonstration in Aden.

On Sunday, Saleh is scheduled to meet with opposition leaders to conclude an agreement that would lead to his stepping down within 30 days. His government insists that the protests should stop at that point. The opposition worries that the agreement will be a 30-day license for Saleh to kill protesters and quash the movement.

3. In Bahrain, Crowds gathered in front of the mosque of Sheikh Issa Qasim to protest the death sentence handed down on four Bahrain Shiites accused of killing a policeman in the course of the rallies. Also, hundreds of Shiites in towns such as Karzakan came out to protest the Sunni monarchy’s crackdown on the protest movement.

4. In Qatif and Awamiya in Saudi Arabia, local Shiites protested against the treatment of their coreligionists in Bahrain. Saudi troops went into Bahrain to prop up the authoritarian Sunni monarchy.

Iran’s Presstv has video of the Qatif demonstrations: