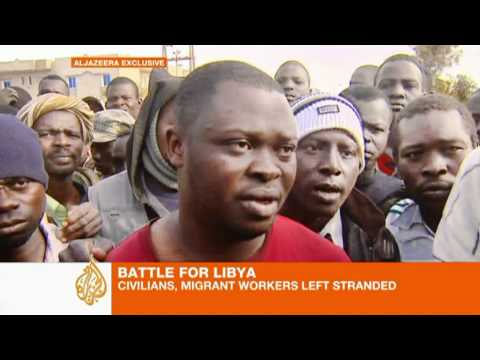 Saif al-Islam Qaddafi, son of the dictator, gave an interview yesterday to the Washington Post. In it he justified the Libyan army’s horrific attacks on the besieged city of Misrata:

‘ “You know what happened in Misurata? It’s exactly what happened in the Cold River [Nahr al-Bared], in Tripoli, Lebanon. The Lebanese army went and attacked three or four civilian districts in Tripoli to fight Jund al-Sham, the soldiers of Islam, you know that terrorist group in Lebanon. They destroyed maybe half the city, they didn’t kill civilians there, but they fought the terrorists because they were inside the buildings. The Americans, the West, they supplied the Lebanese army, and it is a legitimate mission to fight terrorists inside Tripoli of Lebanon. You remember? And I remember they sent an airlift with the Hummer vehicles, arms and munitions. The same thing in Grozny in Chechnya, when the Russian army fought the terrorists, because the terrorists went inside the buildings in Grozny. The same thing happened with the Americans in Fallujah. You know Fallujah? It’s exactly the same. You are not fighting or killing innocent people or civilians, because it is not in the interests of anybody to kill civilians, but the terrorists are there, the terrorists are there. ‘

The Qaddafi kids are spoiled, sadistic billionaire brats who have been acting out in fancy places in Europe while large numbers of Libyan working people were left unemployed or poverty-stricken, despite their country’s oil riches. ( Before the uprising, unemployment in Libya was estimated at 30%, and by some estimates a similar proportion was under the poverty line.) This slick interview with the glib comparisons is typical of the way they think they can get away with anything, anything at all. What they don’t seem to understand is that when they speak, they reveal their own alienness and hostility to the working and middle class Libyans they rule and exploit. See this blog of an American in Benghazi for what people there think of the Qaddafis.

Let’s take Hannibal Qaddafi, the youngest son. Last year he eluded arrest after he beat up his wife, to the point that shrieks of horror were coming from their $8000 a night suite at Claridge’s in London. A witness reported, “She was bleeding heavily from her nose and face. Her nose was clearly broken and it looked like she would need surgery.” She later denied she was beaten. When police came, his security men attacked them and Hannibal slipped out to make his way to the Libyan embassy to elude arrest. In 2008 he had been arrested with his wife for beating his Tunisian and Moroccan servants within an inch of their lives while he and his wife were staying at a “luxury resort” in Geneva, Switzerland. Bail was set at several hundred thousand dollars for the delightful couple. When Switzerland dared jail him for two days, Muammar Qaddafi declared economic warfare on Switzerland in retaliation. The thuggishness of the sons is reflected in the thuggishness of the foreign policy.

Then there was the time in 2004 when Hannibal was arrested for hotrodding his Ferrari at 90 miles an hour through central Paris and up and down the Champs Elysee, running several red lights. When French police tried to arrest him, two cars full of his bodyguards pulled up and beat up the police. Gaddafi was let go by French authorities, infuriating the French police.

Then there is Saadi, who tried to play professional soccer, but failed a drug test. Saadi used his family connections to make a killing in the petroleum business. Or there is Muhammad Qaddafi, who once menacingly insisted that Pope Benedict was obliged to convert to Islam.

The notorious Khamis heads up his own, murderous brigade in the Libyan military, and is accused of recruiting mercenaries to attack protesters last February and early March, which helped turn a largely peaceful protest movement into a civil war.

Or Saif al-Islam Qaddafi himself, who plagiarized many passages from others in his London School of Economics Ph.D. dissertation (that is, he is an inveterate cheat and liar). He later gave $2.4 million to the university, making the pledge before he was graduated. He was more recently caught on tape inciting Libyan troops to massacre the then-peaceful urban protesters against his father’s regime. His book manuscript at Oxford University Press, later pulled because of the plagiarism, had examined the role of soft power in democracy.

But let me return to the comparison he made, of what his military is doing to Misrata and some other recent sieges of cities by militaries. Saif Qaddafi’s comparisons are absolutely bizarre, suggesting that whatever exactly are the mental problems of his father, they are hereditary. The Yeltsin wars on little Grozny are estimated by the Russian Duma’s human rights commission to have killed on the order of 27,000 and to have displaced 268,000. Is that really the comparison he wants to make to what his forces are attempting to accomplish in Misrata?

Or, Falluja? Is he actually comparing the Libyan army’s attempt to subdue a Libyan city to the invasion of an Iraqi city by a foreign army of occupation? By the way, the US telegraphed its attack on Falluja and encouraged civilians to leave, which most apparently did; Qaddafi’s forces have not behaved similarly in Misrata, to say the least, as Aljazeera makes clear:

Likewise, Nahr al-Bared was a Palestinian city-camp of some 70,000 people outside Tripoli, to which Palestinians kicked out of their homes by the Israelis in 1948 had been transported by the UN. Palestinians will never be given citizenship by the Lebanese because they would upset that country’s religio-ethnic balance. They are stateless and cannot own property or very easily work. The Israelis de facto put them in a series of prisons in Lebanon, from which they cannot escape, and the Lebanese (most of them Shiites and Christians) refuse to pay the cost of the Israeli imposition of the Nakba on Sunni Arabs, nor should they have to. Nahr al-Barid was completely destroyed by the Lebanese army in 2007 to get at maybe 50 terrorists of the Fatah al-Islam group. The Palestinians have lost their homes all over again, and are in UN-provided temporary shelter, full of despair.

What Saif Qaddafi’s three comparisons have in common is that they are incidents of horrific destruction and disproportionate use of force exercised by outsiders on locals of a different ethnicity. Presumably what he wanted to play up was that the NATO powers did not vocally condemn any of these three military actions at the time, and indeed one was undertaken by a NATO member. But without meaning to, what he most clearly did was to reveal how he thinks of cities such as Misrata and Benghazi, as under the occupation of the Qaddafis, as “other” and alien, and as fair game for massacre. He more or less admitted that the Qadadfa tribe is a regime of foreign military occupation over the rest of the Libyans, which is willing to kill thousands of plebeians to maintain that occupation for the benefit of the spoiled, sadistic billionaire brats.