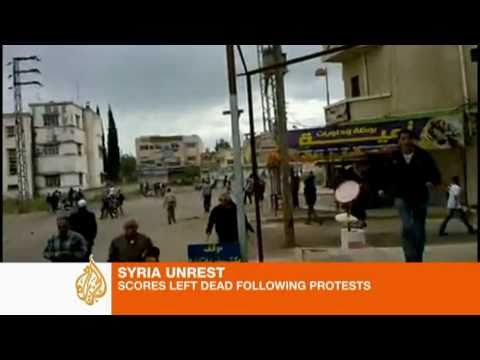 You never issue an ultimatum unless you are prepared for war. Syrian President Bashar al-Asad abolished the forty-year-old emergency law on Thursday, and he had dismissed two unpopular governors against whom there had been protests. Then he said that there was no longer any reason for anyone to demonstrate, implying that further demonstrations would be dealt with harshly.

Tens of thousands of Syrians challenged the president on “Great Friday”. In numerous cities, from Homs in the north to Izzra in the south, crowds came out and chanted, “The people want the fall of the regime.”

The regime reciprocated by wanting the fall of the people. In numerous cities, security police opened fire with live ammunition on unarmed civilian crowds, i.e. on non-combatants. Dozens of protesters were shot down dead, and dozens more wounded. Some late reports put the death toll for Friday at 90. It is a startling statistic, and bodes very badly for the regime. Future crowds will demand action against the police who opened fire, and against their bosses in the Baath Party.

One technique of the Arab Spring protesters has been to turn funerals for slain protesters into political events in their own right.

Josh Landis points out the significance of protests in the historic Midan area of Damascus, where nationalist crowds condemned French rule. His readers point out how broad-based the protests now are, with Druze and Imaili towns joining in.

Landis reprints Robert Kaplan’s piece on the possible fragmentation of Syria. Zionists are always hoping for the break-up of Arab countries so as to level the playing field for Israel (Israel’s population is 7.2 million, 20% of them Arabs; Syria’s population is 22 million. But by now country nationalisms are strong in the region and Syria’s minorities are too small and too spread around to make break-up likely.

If the crowds go on growing, in the face of Draconian repression, they could well pull down the one-party state.