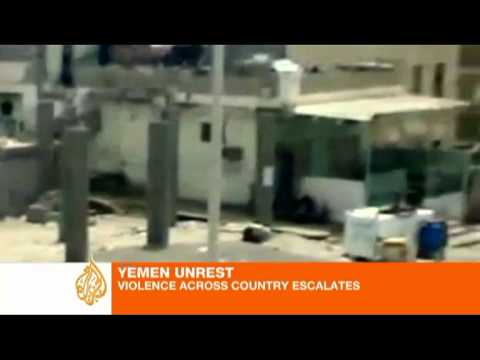 The political situation in Yemen continued to deteriorate on Tuesday. Since Sunday, 50 protesters have been killed by troops and security forces in the country’s second-largest city, Taizz. The government insisted on forcibly removing the protesters from their own version of Tahrir Square, which accounts for some of the casualties of the past two days, which include according to some reports hundreds of wounded.

In the capital of Sanaa, fighting has again broken out between the followers of Sheikh Sadiq al-Ahmar and government troops. Al-Ahmar is both head of the Hashed tribe and leader of the fundamentalist, tribal al-Islah Party. He had been allied with President Ali Abdullah Salih until this spring. Although Saleh springs from the Hashed tribe as well, his military is now acting as a tribal force against those loyal to al-Ahmar, whose compound is being subjected to heavy fire.

In the provincial capital of Zinjibar, a small group of Muslim fundamentalists has taken over. The regime calls them al-Qaeda, but they are not in fact followers of Usama Bin Laden.

The USG Open Source Center translated or paraphrased Yemeni reactions to the Government’s attack on protesters in Ta’izz:

Yemeni newspapers and news websites were observed on 29 and 30 May to carry reports on the reactions to the unrest in Yemen. The following is a roundup of reports as published by several Yemeni papers and websites:

Sanaa SABA in Arabic — Official news agency of Yemen; URL: http://www.sabanews. gov.ye — on 29 May carries a 250-word report citing Staff Major General Muhammad Ali al-Maqdishi, commander of the Central Military Area, as categorically denying any connection or relation to the statement made by Major General Abdallah Ali Ulaywah, in which he called on the security and army forces to join the revolution. The report also cites Maj Gen Al-Maqdishi as stressing his allegiance, as well as that of all the heroic militants of the Central Area, to constitutional legitimacy, which is represented by President Ali Abdallah Salih.

Ma’rib Ma’rib Press in Arabic — Independent news website focusing on Yemeni affairs; URL: http://www.marebpress. net/ — on 30 May carries a 400-word report on the statement issued by the Joint Meeting Parties, JMP, following the Ta’izz incidents. The report cites the statement as “denouncing the ongoing crimes by President Salih and his security and military forces against humanity, targeting the youth of the peaceful popular revolution in the squares of change.” The report also cites the statement as “calling on brothers, friends, the international community, and the UN Security Council to make decisions and take decisive stands that protect Yemenis from this hysteria” and stop the bloodshed in Yemen.

Sanaa 26 Sibtimbar Online in Arabic — Yemeni Armed Forces’ official news website; URL: http://www.26sep.net/ — on 29 May carries a 450-word report citing a military media source as expressing his astonishment over the insistence of some opposition websites, including the Ma’rib Press website, on publishing false rumors. The report also cites the source as denying the reports published by Ma’rib Press claiming that the 9th Mechanized Brigade of the Republican Guard in Dhamar Governorate has joined the youth revolution. The report also cites Staff Brigadier General Ibrahim al-Ja’ifi, commander of the brigade, as stressing that the affiliates of the brigade will remain faithful to the homeland and to constitutional legitimacy.

Sanaa 26 Sibtimbar Online in Arabic on 30 May carries a 350-word report citing Staff Brigadier General Murad al-Awbali, commander of the 22nd Republican Guard Brigade in Ta’izz Governorate, as categorically denying the news reported by Suhayl TV and Al-Jazirah Channel claiming that the brigade’s forces have joined the protesters in Ta’izz. The report also cites Brig Gen Al-Awbali as stressing that all of the affiliates of the brigade will remain faithful to constitutional legitimacy.

Al-Wahdawi Online in Arabic; URL: http://alwahdawi. net/ on 30 May carries a 550-word report on the statement issued yesterday by the executive committee of the coordination council of the peaceful revolution forces at Al-Taghyir Square in Sanaa on the “brutal massacre” committed by (President) Ali Salih in Ta’izz. The report cites the statement as stressing the council’s insistence on the peacefulness of the revolution, and hailing the members and officers of the Armed Forces who have rejected to engage in a useless war against the people. The report also cites the statement as hailing the heroic stance of the tribesmen, who confronted some brigades of the Republican Guard forces who had been heading to the cities to attack the protesters, and forced them to retreat. Al-Wahdawi Online in Arabic

on 30 May carries a 400-word report citing the Preparatory Committee for National Dialogue as “condemning the heinous crime perpetrated against the protesters at sit-in square in Ta’izz city.” The report also cites the committee as “holding Ali Salih, his sons, and his supporters, responsible for spreading security chaos in Abyan Governorate previously and in Lahij Governorate currently, and for the serious consequences that could result from these acts, including the spreading of crime.” Sanaa News Yemen Online in Arabic — Independent news website focusing on local affairs; URL: http://www.newsyemen.net/ —

on 30 May carries a 500-word report citing the civilian alliance of the youth revolution as condemning the continuation of violent practices by the regime, and as calling on the protesters to peacefully escalate their protests in the various squares of change and freedom.

Sanaa News Yemen Online in Arabic on 29 May carries a 500-word report citing a high-ranking military source as saying that the so-called “Statement No 1” that was issued by military personnel who lost their leadership capacity “is an attempt to split the army and exploit the demands of the youth so as to restore their control of Yemen’s future.” The report also cites the source as saying that “some of the signatories to the statement were negatively affected by the endorsement of financial reforms on the budgets of the armed and security forces” approved by President Salih in early May.

Sanaa Al-Masdar Online in Arabic — Website of independent weekly newspaper, critical of government policies; URL: http://www.al-masdar. com/ –on 29 May carries a 400-word report citing the JMP as holding the Yemeni president responsible for the attacks carried out against the protesters in Ta’izz, and as “pledging to prosecute President Salih and bring him to justice.” The report also cites Shaykh Husayn al-Aji al-Awadi, one of the prominent leaders in the Ma’rib and Al-Jawf Tribes’ Alliance, as calling on the tribes, Huthists, and military units supporting the revolution “to establish a national popular army to confront the crimes by President Salih and his bullies.” The report also cites Shaykh Al-Awadi as “calling on all Yemenis in the various governorates to call on the military units present in their areas to join the ranks of the rebels,” adding that “they must besiege and force any military unit that does not respond to this call to surrender.” ‘