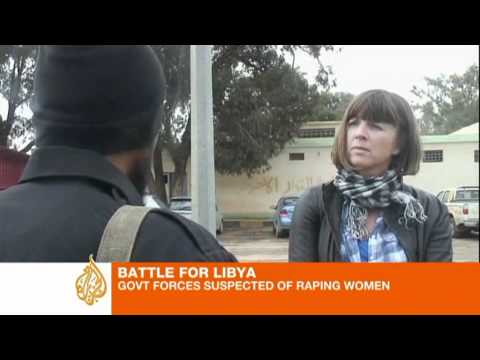 The Qaddafis have repeatedly accused the Free Libya forces to the east and south of Tripoli of being Muslim radicals and even al-Qaeda sympathizers. On Tuesday, the Libyan opposition responded in the Saudi-owned al-Sharq al-Awsat to these charges, denouncing them as lies. They said that in fact, they have had to fight pro-al-Qaeda bands (implying that they were among Qaddafi’s mercenaries?). Excerpts below, translation by the USG Open Source Center:

In a statement to Al-Sharq al-Awsat, Ali al-Isawi, official in charge of foreign affairs in the National Transitional Council (NTC) [in Benghazi], which is opposed to the regime of Libyan leader Col Mu’ammar al-Qadhafi, has again denied any presence of Al-Qa’ida organization in the areas that are under the control of the rebels. In a statement over telephone from the NTC’s headquarters in Benghazi, he said that the NTC’s policy is to cooperate with the international community in combating terrorism and extremist activities, noting that at the end of March, the NTC released a firm statement on this commitment.

Al-Isawi said that Al-Qadhafi’s future will be decided by the Libyan people, stressing that the Libyan people are struggling to restore their freedom and dignity. He said that the fate of Usamah Bin-Ladin, leader of Al-Qa’ida organization, should serve as a lesson to anyone with insight, as he put it. . .

Col Muhammad Bani … said that the NTC, which represents the rebels, is extremely happy and is waiting to see the next step, adding: We want the Americans to do the same with Al-Qadhafi.

For his part, Abd-al-Mun’im al-Huni, NTC’s representative to Cairo and to the Arab League, said Al-Qadhafi is facing a fate uglier than that Usamah Bin-Ladin had faced. In a statement to Al-Sharq al-Awsat, he added: “This man (Al-Qadhafi) did not show mercy to his people and is daily engaged in heinous killing of innocent women, children, and elderly; these are crimes against humanity.”

Al-Huni said that if the Libyan regime’s story of the death of Al-Qadhafi’s son, Sayf al-Arab, is true, his death does not evoke sympathy, because Al-Qadhafi absolutely did not feel any sympathy for the Libyan people. He added: Al-Qadhafi is now drinking from the same cup which the Libyan people drink every day in various Libyan regions and towns at the hands of his military forces and security brigades, which are backed by mercenaries.

It should be recalled that the NTC has emphasized the Islamic identity of the Libyan people and its commitment to moderate Islamic values and total rejection of all extremist ideology. It pledged to fight extremist ideology under all circumstances, stressing its rejection of claims linking Al-Qa’ida organization to the rebels in Libya.

The NTC also pledged to work for enhancing the important role that the United Nations, its commissions, and working teams, which are concerned with fighting terrorism, are playing. It pledged to fully cooperate with the UN bodies, and to abide by all international agreements and protocols pertinent to combating terror. It stressed that it will act on the legislative and executive levels to apply all provisions of international agreements and protocols.’

Aljazeera English has a video report of the use of rape as a tool of war by the Qaddafi brigades.