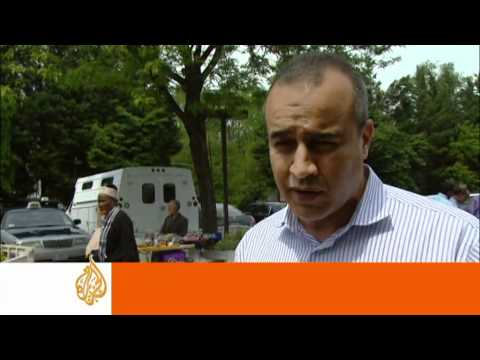 Usama Bin Laden, a mass killer, passed virtually unmourned from the scene. There were no demonstrations against his killing in the Arab world. A few Taliban protested in Quetta and Afghanistan, as one might expect. Mostly Muslims denounced him and expressed relief he was gone.

Bin Laden carried out 9/11 to begin a big political and social movement. Nearly 10 years later the vast majority of Muslims did not trust him and many seem glad to see the back of him, while large numbers had decided that he was irrelevant to their lives.

President Asaf Ali Zardari, whose own wife (Benazir Bhutto) was killed in a terrorist attack, said in an op-ed in WaPo on Monday,

“Some in the U.S. press have suggested that Pakistan lacked vitality in its pursuit of terrorism, or worse yet that we were disingenuous and actually protected the terrorists we claimed to be pursuing”. . .”Such baseless speculation may make exciting cable news, but it doesn’t reflect fact. Pakistan had as much reason to despise al-Qaeda as any nation…The war on terrorism is as much Pakistan’s war as as it is America’s.”

Zardari belongs to the Shiite branch of Islam, which was targeted by Bin Laden. Pakistan itself has seen larges numbers of bombings since summer, 2007.

Many observers, including Cameron himself, have questioned how Bin Laden could be living in a large compound in the military garrison town of Abbotabad without the knowledge of Pakistani officers and security officials.

Afghanistan’s president, Hamid Karzai said that Usama Bin Laden had massacred thousands of Afghans in the late 1990s, even before 9/11. He warned the Taliban to take a lesson from the terrorist leader’s demise and to accept peace negotiations. He said he was vindicated in his position that ‘the fight against terrorism is not in Afghanistan…’ adding, ‘I want to call on NATO that the fight against terrorism is not in our homes or villages, nor is it in searching our homes. They should stop that.’

Outgoing Lebanese prime minister Saad al-Hariri , a Sunni Arab politician backed externally by Saudi Arabia, exulted in Bin Laden’s demise, saying that “The harm inflicted by Osama bin Laden to the image of Islam and Arab causes is equal to the harm inflicted by the enemies to the causes of Muslims everywhere… [Bin Laden] represented over two consecutive decades a black mark in this history and who introduced the culture of killing, terrorism, destruction and sabotage to minds of thousands of youths…” The recent Pew Charitable Trust shows that only 1 percent of Lebanese Muslims say they trust Bin Laden.

Jordan hoped that the death of Bin Laden would end the smearing of Islam as a matrix for terrorism. King Abdallah II of Jordan had said of al-Qaeda, “They are religious totalitarians, in a long line of extremists of various faiths who seek power by intimidation, violence, and thuggery.” Polling shows that most Jordanians turned against Bin Laden and al-Qaeda with the fall, 2005, bombings of hotels in Amman by “al-Qaeda in Mesopotamia.”

The Turkish foreign ministry called Bin Laden’s death a significant step forward in the fight against terrorism. Turkey, pop. 72 million, is a largely Muslim country where only 3 percent of the people trust Bin Laden to do the right thing.

The Yemeni Embassy in Washington DC said, “The Government of the Republic of Yemen welcomes the elimination of Usama Bin Ladin, the founding father of the Al-Qaeda’s terrorist network. The successful operation, spearheaded by U.S. forces, marks a monumental milestone in the ongoing global war against terrorism.” Yemen has fought its own small branch of al-Qaeda in the Arabian Peninsula (some 300 men) in the rugged southeast of the country, and has played up that threat to seek US aid monies.

Both the Yemeni and the Saudi governments welcomed Bin Laden’s demise as possibly signalling the end of an age of terror. Palestinians were divided, with PM Salam Fayyad of the secular PLO exulting that a dark age had ended, while the Muslim fundamentalist organization Hamas protested Bin Laden’s killing and lionized him.

The Iraqi foreign minister, Hoshyar Zebari, a Sunni Muslim Kurd, said, “I’m delighted to see the end of Bin Laden.” A self-announced al-Qaeda franchise killed thousands in terrorist operations in Iraq in the aftermath of Bush’s invasion of the country and destruction of its security apparatuses.

Egypt’s Muslim Brotherhood said that Bin Laden was not representative of Islam and they condemned his methods. On the other hand, they objected to his having been killed rather than captured for trial.

Both the Brotherhood and Iran said that with Bin Laden’s death, the US had no reason to remain in Iraq and Afghanistan and should withdraw. The Iranian Shiite regime despises al-Qaeda, and the feeling is mutual, but is wary of the US military presence on either side of it.

Bin Laden’s passing is, then, an anti-climax. A nothing. Terrorism is just garbage, and produces nothing but garbage. It has mostly been taken out, with nothing but the stench hanging in the air. Most Muslims have moved on. So should Americans.

In fact, Americans should mark these days as an opportunity to recover our lost civil liberties.

Aljazeera English has video on the reaction of Arab Americans: