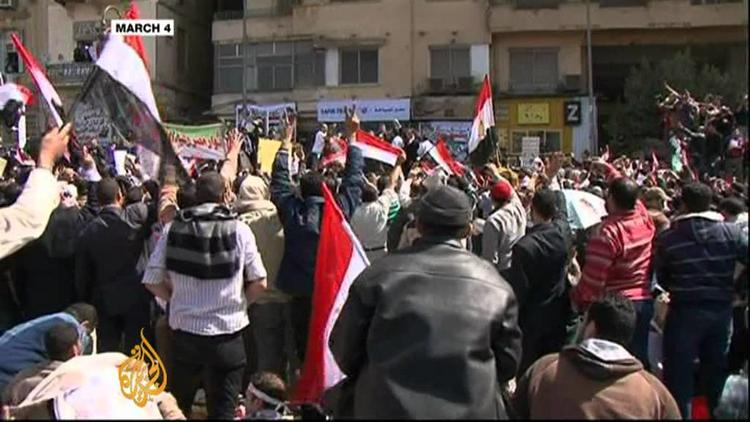 1. Former Egyptian president Hosni Mubarak and his sons will stand trial for ordering deadly force to put down protesters in Egypt (several hundred were killed), as well as for corruption.

The trial, while it is intended to strengthen the rule of law, is attended with dangers. It could stiffen resistance of other Arab leaders to stepping down, if they think they would then face legal action. And it could polarize Egyptian society, where the wealthier classes were strong Mubarak supporters.

2. Egypt’s new transitional government will open the crossing at Rafah on Saturday, ending the blockade of Palestinians in Gaza. Foreign Minister Nabil Elarabi rightly called the blockade of the civilian population “disgusting”; it is illegal in international law. It is a sign of a healthier and less pathological policy being made by an Arab government that actually owes something to its people’s public opinion. Palestinians in Gaza have not been permitted to export their made goods since 2007, throwing them into deep poverty and making 56 percent ‘food insecure.’ Israel also places severe limits on what can be imported. Israel destroyed one in eight residences in Gaza in 2008-9, and most have still not been rebuilt for lack of concrete. Many residents of Gaza are refugees from what is now Israel whose families were ethnically cleansed by Zionist forces in 1948.

3. A kind of civil war has broken out in Yemen between followers of President Ali Abdullah Saleh and his opponents in the Hashed tribe led by Sheik Sadiq al-Ahmar, which has left 49 dead since Monday. Although the regime has killed over 100 demonstrators this spring, the latter have mostly remained peaceful. Saleh’s attack on al-Ahmar’s compound and the paramilitary response of the Hashed tribesmen mark a new escalation of the conflict. I was a teenager in Asmara (now Eritrea) in 1967-68 during the then Yemeni civil war and remember US personnel coming over to Kagnew Station from Sanaa when the fighting got heavy. News that US embassy personnel are being moved out of the capital after the recent round of fighting brought back those memories, and I hope these tribal fighting isn’t a prelude to another civil war.

4. People who wonder what the end game in Libya is should consider that the Tripoli government is now offering negotiations with everything on the table (i.e. including the possibility that the Qaddafi family will have to step down). Heavy NATO air strikes on military installations in the capital have upped the ante, as has the rebel defeat of Qaddafi’s forces at Misrata, with UN/ NATO help. Likewise, the International Criminal Court indictment of Qaddafi has further isolated his regime, and there are signs of the African Union backing away from him.

Aljazeera English reports skeptically on the ICC indictment, but the ICC head defends its relevance ably:

5. Youth journalists and uncensored newspapers have sprung up in liberated Benghazi, Libya, by the dozens since Muammar Qaddafi’s ‘Revolutionary Committees’ were overthrown and censorship abolished.