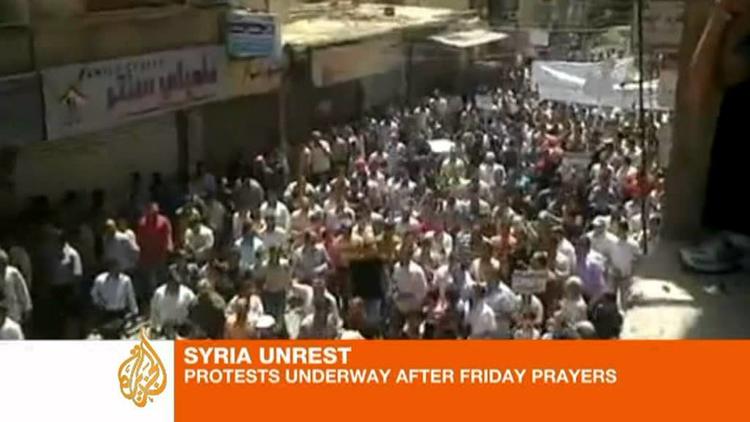 Thousands of Syrians demonstrated all over the country on Friday, especially in smaller cities and rural towns. Some 7000 came out in downtown Homs. Troops fired on crowds and responded with brutality against protesters. Aljazeera English reports:

As the Syrian military headed into the town of Jisr , where 120 members of the security forces died in internecine fighting a few days ago, many Syrians fled across the border to Turkey:

Turkey’s Prime Minister Tayyip Erdogan, a friend of Bashar al-Asad, seemed to begin breaking with him in comments on Friday in which he complained of the latter’s propensity for dealing with protests violently and disproportionately. Turkey is afraid of the Syrian unrest spilling on to it.

In Yemen, an enormous crowd of 100,000 marched in the capital of Sanaa to demand that President Ali Abdullah Saleh not return to the country. The remnants of his regime arranged for a much smaller counter-demonstration elsewhere in the capital, which went off peacefully. McClatchy reports that the Saleh clan has moved behind the scenes to strengthen its control of key security units, and that Saleh’s son, Ahmad Ali, has moved into the presidential palace.

In Libya, the people of Zlitan near Misrata rose up against Qaddafi’s forces, and heavy fighting ensued in the city. It is a key to opening Tripoli to an advance from the West, and so if it fell to the Free Libya forces, it would hasten the end of the war. Also on Friday, Qaddafi brigades continued their attacks on the city of Misrata, killing over twenty persons with indiscriminate fire. Qaddafi brigades also bombarded Gadamis, in the southwest near Tunisia. The Free Libya forces are puzzled as to why NATO does not attack the forces besieging Misrata, and I share their puzzlement. NATO has been intensively bombarding Tripoli, which may or may not actually be useful (no one seems to be explaining the rationale for these tactics), but Qaddafi forces appear to be able to roll around through the desert at will. My guess is that French and British air forces lack the precision capabilities of the American, and that there is still poor coordination between the Free Libya forces and their air protectors, which could lead to unfortunate friendly fire incidents, and NATO is being cautious. As for Tripoli, given that Qaddafi continues to order attacks on civilian cities who are protesting him, I think it is within the UNSC mandate to attack his command and control centers (how else would you protect the populations being assaulted?) But i know of no instance where ‘shock and awe’ worked to produce a military victory, and suspect that NATO is over-doing this tactic.