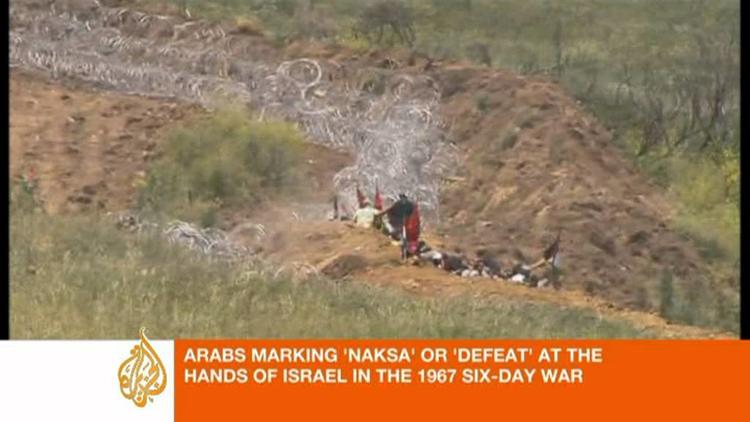 Israeli troops on Sunday fired live ammunition into unarmed crowds of protesters who moved toward the barbed wire fence marking the Israeli-occupied Golan Heights (which is Syrian territory). Aljazeera reports:

Israeli troops have a lot of experience with crowd control and have tear gas and other non-lethal measures at their disposal, argues UN special envoy Richard Falk, and one can only therefore conclude that they were deliberately ordered to kill protesters with live ammunition as a lesson to anyone who wanted to try to stage such demonstrations in the future. That is, these shootings and woundings of unarmed protesters are a crime against humanity. Note that the soldiers were standing on Syrian territory (occupied) and shooting into Syrian territory.

There is no reason to question the sincerity of those who risked their lives. Israel captured the Golan Heights in 1967 from Syria. It is illegal according to the UN Charter for a state to permanently acquire territory from another nation-state, or for the occupying power to introduce significant change into the occupied territory. The population living in the occupied Golan is cut off from relatives in Syria. Some 400,000 Palestinian refugees, deprived of citizenship in any state by their families’ expulsion from their homes by Israelis in 1948, live in Syria.

Israeli officials charge that Syria is promoting the protests to divert attention from its own violence toward protesters. But there is no evidence for this allegation, and Palestinians have every reason to protest their fate.

It would be fairer to say that Syria’s execrable behavior is diverting attention from the Netanyahu government’s crimes against Palestinians. The Arab Spring has made most governments in the region look bad, and Israel has not behaved better than the others.

Meanwhile, some 5000 Israelis of the Mensch variety marched in Tel Aviv in favor of a Palestinian state on Sunday. They were opposed by counter-demonstrations by the schlemiel faction.