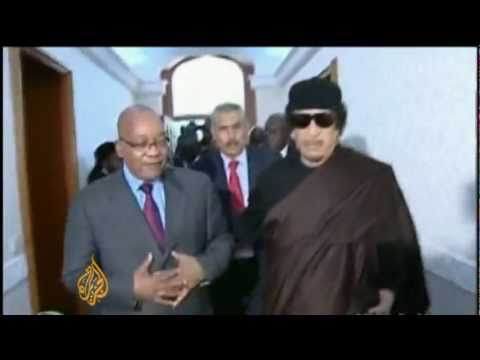 The International Criminal Court not only has evidence that Libyan soldiers have been using rape as a way of punishing and humiliating rebel populations, it has credible evidence that the policy was ordered by Muammar Qadhafi himself, and that the soldiers were provided with viagra to make them better rapists. The state provision of such drugs for this purpose is unprecedented, though rape as a tool of war and repression is common.

A UN Human Rights commission headed by Cherif Bassiouni has found the Qadhafi regime guilty of war crimes. Fighting, mainly consisting of attacks by Qadhafi forces on dissident populations, may have killed 10,000 to 15,000. Qadhafi forces have used heavy weapons against civilian noncombatants, have made people disappear, have engaged in torture. The commission also found war crimes on a lesser scale among the rebel forces. The report recommends that Qaddafi be referred for prosecution at the International Criminal Court.

China has had direct contact with the TNC, and is offering itself as an intermediary between Tripoli and Benghazi.

Meanwhile, the Socialist government of José Luis Rodríguez Zapatero newly recognized the Transitional National Council in Benghazi, as did Australia. Foreign Minister Trinidad Jimenez attended the Contact Group meeting of some 20 nations in the United Arab Emirates on Thursday, where the TNC picked up nearly $1 bn. in pledges of aid, $600 mn. from Italy alone. Details are given here.

Spain put forward some enlightened principles about how to go forward, and since it had its own democratic transition only three decades ago, it has a lot of experience to offer the Libyans. The emphasis on including former regime figures, and on partnership rather than a Western leading role, would be all to the good. The USG Open Source Center translates from the semi-official Spanish account:

Abu Dhabi, 9 June: Today Spain proposed implementing an aid plan for Libya, once Mu’ammar al-Qadhafi has been overthrown, with the aim of giving the country democratic institutions and training a new army in collaboration with the Interim National Council which groups the rebels together.

Spanish Foreign Minister Trinidad Jimenez made this proposal at the meeting of the Contact Group on Libya held in Abu Dhabi today.

At a news conference before the session began, Jimenez said that this proposal of a “pact” between the international community and the Libyan opposition will be put into effect once Al-Qadhafi leaves power.

In her view it is difficult to make predictions concerning the fall of the dictator, but the allied countries believe that it will take place “within a short period of time”.

“We have seen that diplomatic, political, economic and military pressure is leaving Al-Qadhafi more isolated every day,” she said.

Jimenez explained that the aid plan which Spain is proposing, which would complement the road map set out by the Interim National Council, would incorporate three spheres: political, economic and security.

In the first, the goal would be to draft a constitution and establish new institutions to build a “democratic, united, independent” state.

According to Jimenez, the European Union “could lead this task” and the economic one, which would be a matter of cooperating to ensure that the wealth generated by Libya’s natural resources, mainly gas and oil, benefit the Libyan people.

The third goal, bound up with security, would mean setting in progress a programme to train the Libyan police and army so that they serve “the principles of the law-based state”.

In each of the three spheres, the 20 or so countries participating in the Contact Group on Libya would contribute their experience and knowledge, although Jimenez emphasized the particular contribution which could be made by the EU.

The minister explained that it is not a plan for “tutelage”, but for collaboration between the allies and the Interim National Council to enable the Libyan people to decide their future.

She also specified that it is not intended to copy the model applied in other countries, such as Afghanistan. ”
We are working in a totally new way,” she added.

As she did yesterday during her visit to Benghazi, the de facto capital of the rebels, Jimenez emphasized that the Interim National Council is the legitimate representative of the Libyan people and that it must lead the process of reconciliation without Al-Qadhafi.

The Spanish foreign minister said that the “post-Al-Qadhafi” stage should involve the participation of Libyan representatives of “all currents of thinking”, including those of “people who have belonged to the circle” of the dictator.

With regard to Spain’s participation in the financial mechanism to help the rebels, Jimenez said she trusted that the allied countries will reach agreement today on how it should be implemented…