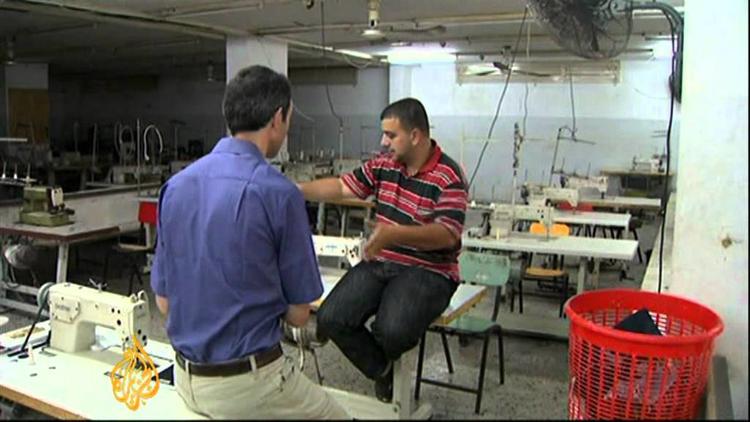 The illegal Israeli blockade of little Palestinian Gaza (pop. 1.5 million) has produced 45% unemployment, perhaps the highest in the world, and a situation in which real income has fallen by a third in the past five years. This according to [pdf] a new report by the United Nations Relief and Works Agency. The bad economy, caused by an Israeli policy of blocking all exports from Gaza and severely limiting imports, has an especially severe impact on refugee families who had been ethnically cleansed by Israelis from what is now Israel in 1948, who make up about 40% of the Gaza population. The Guardian has more.

The Gaza Strip’s stock of medicine has also fallen to dangerously low levels. Aljazeera English reports that: “Dr Basim Naim, the minister of health in the de facto government of Gaza, says 178 types of necessary medications are at near zero balance in stock. He says more than 190 types of medicine in stock are either expired or are close to their expiry date, which has forced his administration to postpone several medical operations.”

Israel’s blockade policy is a way of punishing Palestinians in Gaza for the ascendency in the Strip of the fundamentalist Hamas Party, which won the 2006 elections for the Palestine Authority. But a majority of the Palestinians in Gaza is children, who do not vote, and among whom food insecurity is now at record levels. Israeli officials say the blockade targets arms imports, but in fact it targets the Palestinians of Gaza in toto. Why ban all exports of things produced in Gaza if the aim is to stop arms imports? Why did they ban import of chocolate if that was the aim? Wikileaks State Department cables reveal that Israeli officials have admitted privately that their goal in Gaza is to make Palestinians there live on the absolute edge, without tipping the situation over into clear humanitarian disaster. Arguably, in the latter balancing act, they have failed.

The victory in Sunday’s election of the Justice and Development Party in Turkey was proclaimed by Prime Minister Tayyip Erdogan as a “victory for Gaza.” Turkey opposes the blockade and a Turkish aid flotilla was attacked by Israeli commandos last year this time with lethal force, leaving 9 aid workers dead (including one American). There are plans for more aid convoys. A UN commission found that the attack on the Mavi Marmara was illegal in international law, as is the blockade of the civilian population in general.

The new transitional government in Egypt has slightly opened the Rafah border crossing, but mainly for certain categories of Gaza residents who need to travel outside the Strip. The new Foreign Minister (and incoming head of the Arab League) Nabil Alaraby has called the Israeli blockade “disgusting,” which is about the least harsh thing a civilized person could say about it.

Israel is considered in international law to be the Occupying Power in Gaza, since it controls Gaza’s air, land and sea borders and took control of the place in the 1967 war. As such, Tel Aviv is in contravention of the Hague Convention of 1907 and the Geneva Convention of 1949 on the treatment of populations in territories occupied in war. In fact, Israel has been in violation of international law on this issue for so long and so egregiously that I think a case could be made that its occupation of Palestinian territory is by now itself illegal.