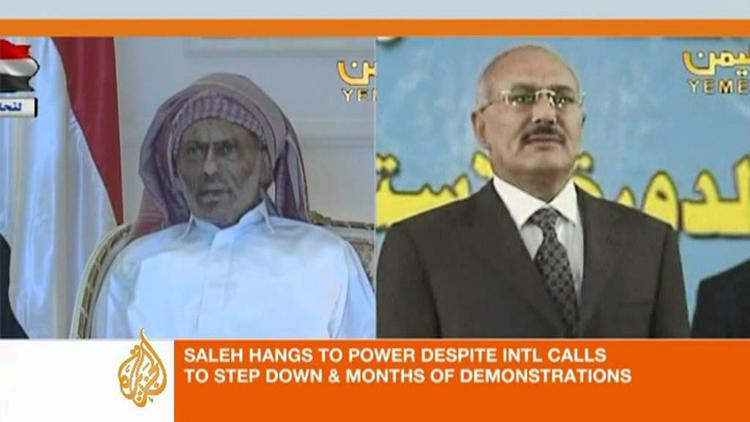 Badly wounded and burned Yemeni President Ali Abdullah Saleh appeared on Yemeni television on Thursday in a pre-recorded address that reiterated his intent to hold onto power even as he made vague noises about including the opposition. Saleh still speaks as though his leadership were robust enough to allow for opposition participation in government, something the opposition contests.

Saleh’s appearance delighted and gave heart to his not inconsiderable number of supports, who fired their arms in the air in Sanaa in celebration, wounding several innocent bystanders. (Those who enjoy engaging in celebratory fire don’t usually understand basic physics, what goes up must come down, and bullets fired from guns come back down with deadly velocity).

Dr. Abd al-Malik Mansour, the permanent Yemeni delegate to the Arab League, criticized Saleh for choosing to come on television at this delicate political moment, and slammed his supporters for killing innocents with their celebrations.

Opposition leader Dr. Abdullah Awbal (Obal) of the Assembly Union Party [al-Tajamu` al-Wahdawi] told al-Akhbar that the Yemeni opposition rejected the idea of Saleh returning to power, continued to ignore Saudi letters to them urging negotiation with Saleh, and said it had held a joint meeting with US ambassador Gerald Feierstein on the possibility of setting up a transitional government. The opposition told al-Akhbar that Feierstein was maddeningly vague, giving no sign that the US would oppose the establishment of a transitional council, but also declining to indicate that Washington would recognize it if it were formed. Also, deputy national security adviser John O. Brennan will visit Yemen shortly to get a sense on the ground of the security situation.

The coalition of socialist and Muslim fundamentalist political parties calling itself the Joint Meetings Parties has been accused of hijacking a revolution that began with spontaneous anti-government protests against the government by youth.

Awbal said that the opposition was undeterred by the criticisms launched against the idea of a transitional council, and that it was determined to establish a civil state that was modern and under the rule of law.

Aljazeera also reports on several recent defections to the opposition by members of the elite Republican Guard: