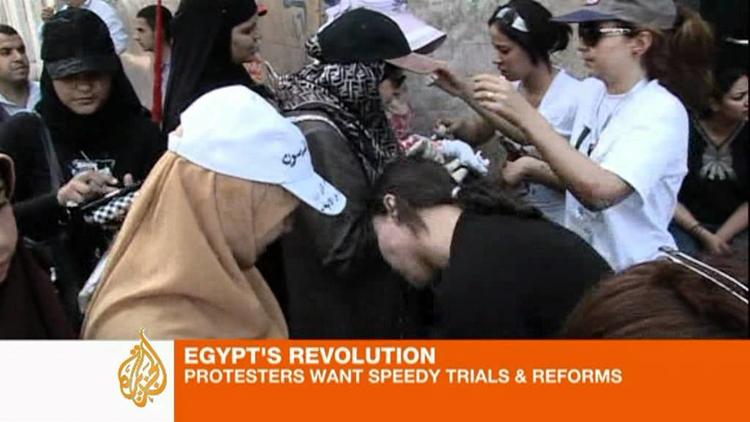 Thousands of protesters came back to Cairo’s Tahrir Square on Friday. Despite the sometimes dark depictions of continuing unrest in the Western press, from all accounts the atmosphere was light and carnivalesque.

Crowds chanted, “No parties, no Muslim Brotherhood! The Egyptian people are in the square!” (La ahzab, la Ikhwan! Al-Sha’b al-Misri fi al-Maydan!” according to al-Ahram. That is, these activists were worried about the revolution being coopted by the parties and fundamentalists active before January.

‘_safi__ Safi: Excellent! Numbers still up in #Tahrir this is officially a sit in, people singing, smiling 🙂 #july8 ‘

That is to say, the Coalition of Revolutionary Youth [demands] open trials, transparency and cleansing the ministry of the interior, as two conditions for ending the demonstration.

Or this, from early morning Saturday:

Many tents were set up, and tweets such as “this time we are here to stay” made clear the organizers’ intention to remain in the square and to put pressure on the interim military government of Air Marshal Husain Tantawi to move to democracy more quickly and to try corrupt officials.

Sympathy demonstrations were held in Alexandria, Suez, Sohag Kafr Shaikh and Aswan, according to al-Ahram–i.e. up and down the Nile Valley.

The huge demonstrations show that the sentiments and spirit that animated the revolution last winter against Hosni Mubarak yet survive, and now challenge the Tantawi caretaker government. If you compare this moment to the changes in Tunisia, it is clear that the Tunisia elite is further ahead than the Egyptian one. They brought in a prime minister who is widely respected and was not close to the old regime and have already tried the former dictator, Zine El Dine Bin Ali, and convicted him in absentia. Similar processes in Egypt are taking so long that many Egyptians are infuriated with the transitional government in a way that most Tunisians are not.

In Egypt, the trade unions are essential actors and potential partners for the other revolutionaries.

The Egyptian Revolution is not over, and we could still see major changes.