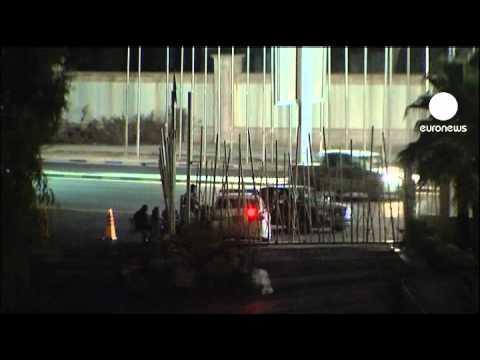 Update: Midday Monday Libyan time, Free Libya forces announced that the bulk of the Qaddafi brigades at Brega had retreated to Ra’s Lanuf and that Transitional National Council troops had taken much of the city. They still have not gone into the middle of the city and need to clear land mines and booby traps before advancing further.

Al-Hayat reports in Arabic on Sunday’s advance by Free Libya forces into the strategic eastern oil city of Brega near the previous front at Ajdabiya. The fighting was hard, and the FL fighters never got closer than 4 kilometers to the city center. On another front, they were stopped kilometers outside the city. About 10 were killed and over 100 wounded during the advance, some from land mines set by Qaddafi brigades. Al-Hayat had reported last week on the Transitional National Council’s decision finally to launch the Brega offensive. Their determination appears to have been reinforced by the recognition proffered them by the 32 nations of the Libya contact group on Friday.

Fighting in places like Brega has seen a lot of seesawing back and forth, and the Free Libya fighters may be pushed back this time. But Qaddafi’s capabilities are being degraded, and at some point there will be a breakthrough there. Possession of the oil-rich Brega basin would probably be decisive for the Transitional National Council in Benghazi.

Meanwhile, the remarkably brave young men of Misrata are gradually moving toward Zlintan and are holding a line 22 mi. West of Misrata, having forsaken their video games and teenaged pleasures of life for war in a popular struggle against repression.

Late Sunday NATO planes bombed strategic sites in Brega, as well as hitting arms depots and anti-aircraft batteries in and around Tripoli, according to CNN. CNN reporters are also skeptical about the small demonstrations Qaddafi has been staging, of about 10,000 each, in towns such as Zlintan and Zawiya that are still under his control. Some seem to have been bused in from Tripoli or coerced.

In fact, there is evidence from defectors that Qaddafi is running out of commanders.