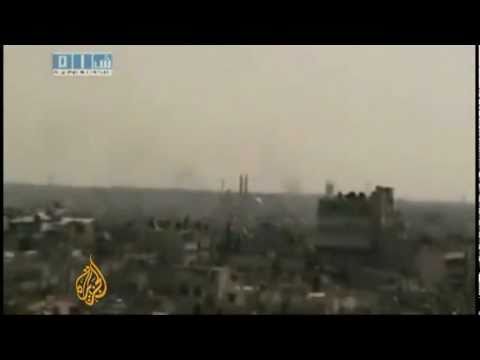 AP reports that most people were trapped in their homes as gunfire crackled in the background in Homs, Syria, the country’s third-largest city on Thursday. Government troops have the dissident city under siege.

Aljazeera English reports on the crackdown on Homs.

Elsewhere in the country on Thursday, people in towns and cities held a general strike, in preparation for demonstrations on Friday.

It is the officer corps and the Damascus and Aleppo urban masses who will be decisive here.

Protesters are aiming to make Friday a day of protest for national unity after some sectarian violence last weekend in Homs between Shiite Allawis and Sunnis and Christians, which the opposition maintains was deliberately provoked by government agents seeking to divide and rule. Allawis are about 10 percent of the population, and follow an esoteric folk religion. I.e. they are not like the Shiites of Iran and Iraq. The upper echelons of the ruling Baath Party, including the family of president Bashar al-Asad, is Allawi, causing some Sunni resentment. Christians are also about 10 percent of the Syrian population. Minority regions have been generally less supportive of the protest movement because Allawis and Christians are afraid the fundamentalist Sunni Muslim Brotherhood might take over if al-Asad falls. The Baath Party, a repressive one-party apparatus, is secular and does not discriminate against the religious minorities.