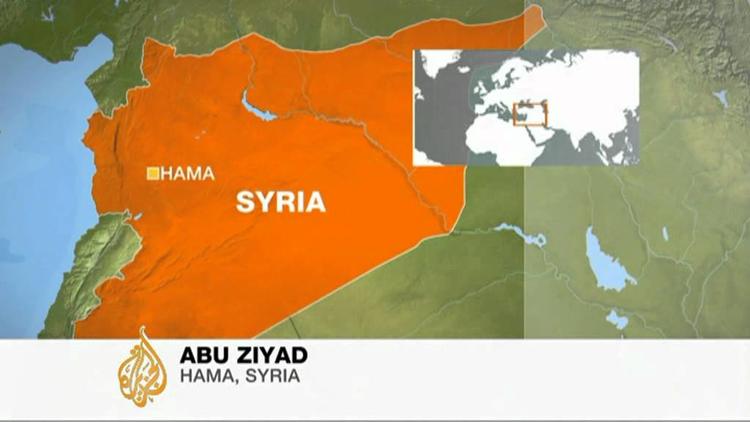 Syrian tanks entered the outskirts of Hama on Monday morning, killing 3 as they cracked down on the protests that have wracked this city in recent days. The large protests in this small city caused dictator Bashar al-Asad to dismiss the governor.

Update: Syrian forces have sealed off Hama, blocking roads into the city. During their crackdown they are alleged to have wounded 20 persons inside, including Olympic boxer Nasser al-Shami, who competed in the 2004 Olympics in Athens and came back with a bronze medal for his country.

Analysts from the International Crisis Group argue that al-Asad’s harsh crackdown, deploying secret police and Republican Guards, is isolating and weakening his regime.

It seems obvious that the Damascus regime is trying to pull an Iran 2009, when deployment of basij volunteer militias and Revolutionary Guards against civilian crowds crushed the Green protest movement. The protests in Syria, however, have been far more widespread and persistent than those in Iran, and the Baath government by now has little legitimacy among large swathes of the population. Still, if you count secular urban Sunnis along with Alawite Shiites, Christians, Druze & etc., it probably still has a majority of the population with it, and fears of the Syrian Muslim Brotherhood are high among these groups.

Protesters maintain that Syrian security forces are now targeting bystanders taking video with their smart phones, so as to suppress images such as those above.

Hama was the site of a major regime massacre in 1982.

The following is a roundup of reports from various Syrian opposition and pro-government news websites, highlighting reports related to the current unrest and military developments in Syria: Developments on the Ground

According to a 3 July report on All4Syria, a third of Syrian refugees in Turkey have returned to Syria. The report cites Turkish statistics saying that out of the 15,205 refugees who escaped to Turkey, 4,658 refugees have returned to Syria. (Dubai All4Syria in Arabic — Website providing news from inside Syria and comments by both government and opposition figures, run by reformist Ba’th Party member Ayman Abd-al-Nur; URL: http://www.all4syria.org)

A 3 July All4Syria report cites a BBC report about the Syrian Army’s deployment of tanks and personnel vehicles at the entrances to the city of Hamah, and indicates that all communications were cut off in the city.

Sham Press and some other websites report that Turkey has declared a state of emergency in the Syria refugee camps after reports about the “possible infiltration by ‘sabotage’ elements into the Turkish territories.” The report says that the Turkish foreign minister issued a decision “banning the entry of any non-Turkish humanitarian organizations into the refugee camps.” (Damascus Sham Press in Arabic — Website affiliated with the Independent Media Group in Damascus, managed by Ba’thist journalist Ali Jamalu; URL: http://www.champress.net )

Sham Press reports that army forces are preparing “to expand their security operation” around the town of Ma’arrat al-Nu’man “to pursue and apprehend elements of armed groups.” The report also refers to unconfirmed reports about the apprehension of the leader of the Takfiri group in Jabal al-Zawiyah.

Several news websites carry coverage of the “National Initiative for Syria’s Future” conference that was held at the Semiramis Hotel in Damascus on 3 July. All4Syria focuses on the “failure” of the conference, quoting one of the participants, who “blamed the failure on the refusal of the Semiramis Hotel officials to allow the invitees into the conference hall on the pretext of conflicting opinions by the security parties, as one party approved the conference while another rejected it.” The report also says that Dr Husayn al-Amash, one of the Initiative’s founders, withdrew from the conference when “it became apparent that some of those present wanted to change the conference from one for the independents empathizing with the youth’s demands into one that supports proposals that do not reflect the youth’s demands.” The report features quotes by Al-Amash, in which he explains his reasons for the withdrawal. The report also cites another participant, who “confirmed” the beating of one of the participants after he delivered remarks calling for “listening to the street’s demands for ousting the regime.”

Also reporting on the conference, Sham Press refers to a statement issued after the conclusion of the conference, in which participants called for “ending the violence, adopting the language of dialogue and reason, fighting the actions of all the armed gangs, demanding the immediate and public investigation of all parties responsible for the deterioration of the security situation, the killings, and the sabotage of public and private properties.” …

In a 3 July report, All4Syria refers to an item in Al-Nahar newspaper, datelined Washington DC, citing a “prominent” US official’s denial of The Guardian’s report about US involvement in the “roadmap” for reforms in Syria that would “keep President Al-Asad in power.” Al-Nahar quoted the US official as saying that “we do not call for any plan and we have not participated in the formulation of any documents related to the opposition’s meeting in Damascus.” The unnamed official, according to the report, also denied Washington’s “involvement in putting the list of invitees for the Damascus meeting,” and accused The Guardian of “attempting to confirm ‘two lies for the Syrian regime: that the opposition is an American tool and that the United States really wants Bashar al-Asad in power regardless of anything’.” …’