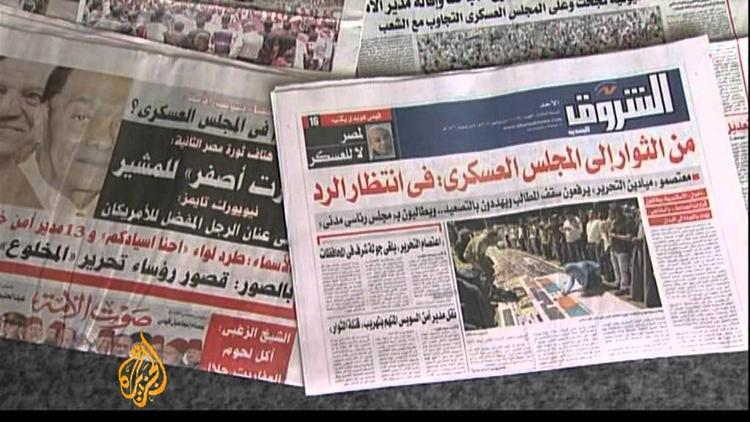 1. The protest movement in Egypt, which started up in earnest again last Friday, is expanding. Thousands were camped out in Tahrir Square in downtown Cairo throughout the weekend, and people streamed there Sunday evening. The crowds closed the Mugamma` administrative building. They are demanding a cleaner break with the old regime, trials for security police accused of murdering protesters, trials for the deposed president, Hosni Mubarak, and his sons, reparations for the families of the martyrs, and more and swifter democratization. There are plans for marches this week and a campaign of strikes and civil disobedience. Many in the protest movement were deeply disappointed with Saturday evening’s speech by interim prime minister Essam Sharaf, which was short on specifics, in response to Friday’s demonstrations.

2. Syrian Vice-President Farouk al-Sharaa chaired a nationally televised debate at Damascus University between regime supporters and a few dissidents over the future of the country. (Most in the opposition boycotted the meeting, but a few joined in.) Dissidents called for a pull-back of troops from protesting cities and the release of prisoners of conscience. As regime officials have done before, Sharaa spoke of the country moving to a pluralistic, multi-party democracy. Dear Baathist Regime in Syria: It is easy to move to pluralistic democracy. You announce the date for elections, and let other parties freely contest them. Talking about it as a far-future ideal in the absence of practical steps will only enrage your citizens. And having a debate in which those who speak on the opposing side are likely to go to jail and be tortured is a farce.

3. President Obama’s national security council aide in charge of counter-terrorism, John Brennan, met with Yemeni president Ali Abdullah Saleh in Riyadh and urged him to step down under an agreement brokered by the Gulf Cooperation Council of small oil states between his government and the opposition, which Saleh kept saying he would sign but always wriggled out of. He says he has had several operations for burns and injuries sustained in a rocket attack on the mosque courtyard in his presidential palace weeks ago.

4. In an embarrassing rift within NATO over Libya, French defence minister Gerard Longuet called for the Transitional National Council in Benghazi to open direct negotiations with the government of Muammar Qaddafi, while the US stuck to its position that Qaddafi must go. In the French system cabinet members seldom have much discretion to carve out their own positions, so Longuet’s remarks almost certainly simply conveyed the current sentiments of President Nicolas Sarkozy. French backpedaling comes as Italian Prime Minister Silvio Berlusconi, a close friend of Qaddafi’s, complained about having been forced into a war he does not support by his own parliament. Likewise, the head of the Transitional National Council, Mustafa Abdel Jalil, had signaled last week that Qaddafi might not have to leave the country, but then was forced to retract. The French and the British, along with the Saudis, dragged a reluctant Obama administration kicking and screaming into the Libya war, so right about now the White House and Pentagon must be having a fit about the French remarks. Turkey, which was pressured into abandoning its own earlier support for negotiations and into recognizing and funding the TNC, must also be bewildered. Wars are in part psychological, and the chief hope for a quick end to the conflict was that Tripoli’s elites would see that Qaddafi’s prospects were dim, and would bundle him out of the country or to internal exile. But instead of showing its poker face to enhance this prospect, NATO member states keep giving Qaddafi loyalists new hope. If the US is indeed committed to the UN charge to protect Libyan civilians from Qaddafi’s murderous minions, now would be a good time for President Obama to play a leadership role instead of ‘leading from behind.’

5. Sunday saw renewed small protests in Morocco by members of the February 20 movement, who are not satisfied with the minor changes instituted by a recent referendum, and want to see the government become substantially more transparent and less corrupt. 8,000 are said to have come out in Casablanca, and 2000 in Rabat, provoking much smaller counter-demonstrations by conservatives supporting the referendum.