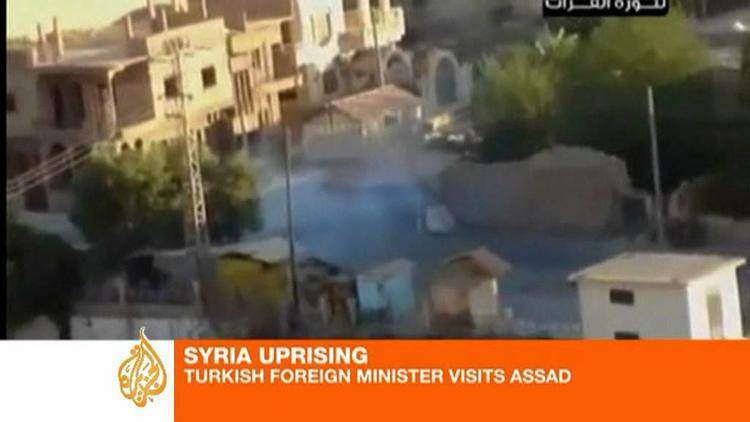 President Barack Obama is seriously considering calling publicly for Syrian President Bashar al-Asad to step down, according to press reports. He is said to be awaiting a briefing by Turkish Foreign Minister Ahmet Davutoglu, who met with al-Asad for 6 hours on Tuesday, as Aljazeera English reports:.

On Wednesday, the US slapped sanctions on Syria’s largest state-owned bank and on its major cell phone company.

Meanwhile, the UN Security Council heard a chilling presentation on the massacres committed by the Syrian government against protesters, and warned Syria to stop its violent repression. Human rights groups estimate that some 2400 persons have died in the protests.

Obama’s plans to call for al-Asad to step down, if those reports are true, seem to me a bad idea. It is unwise to call for something to happen if you can’t make it happen and don’t know whether it will. If Obama calls for al-Asad to be gone, and he is still there years from now, it will just make the US look weak and ineffectual. Denouncing the Syrian strong man’s crackdowns as illegal, and imposing stronger sanctions, would be wiser.

Saudi Arabia has now been deeply critical of al-Asad, with King Abdullah calling the Baath regime “a killing machine.” Riyadh came under pressure to speak out from Sunnis, who see the Alawite-dominated Syrian state as tinged with Shiite Islam, and so view the crackdowns as a Shiite persecution of Sunnis. Likewise, Sunni revivalists are among the key constituents of Turkey’s ruling Justice and Development Party, helping to account for the increasingly strong language Turkey has used toward al-Asad. In contrast, the some 20% of Turks who are Alevi Shiites (a heterodox sect) are said to have some sympathy for Syrian Allawis (the two forms of folk Shiism are not similar in doctrine or ritual practice, however).

That leading countries in the Arab League are now denouncing al-Asad is a blow to his prestige.

But, the regime does not seem that fragile, despite the obvious determination of the protesters. There haven’t been really big demonstrations in the capital of Damascus so far. The religious minorities make up about 25 percent of the population of 22 mn., and are afraid that the opposition is heavily tinged with Sunni fundamentalism. If you add Sunni secularists, you may have a majority of the population who fear governmental change. The security and military forces have not split and continue to back the regime. Mere verbal strong-arming from Washington is unlikely to materially change the situation.