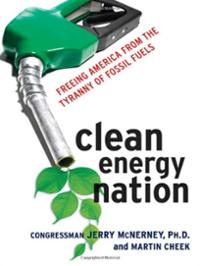 Martin Cheek, co-author of Clean Energy Nation: Freeing America from the Tyranny of Fossil Fuels, writes in a guest column for Informed Comment:

Americans Must Lead the World to Energy Freedom

OPEC and the International Energy Agency are both expecting that demand for crude oil will start rising again next year. OPEC’s market report in July forecasts a rise in crude oil demand of 1.32 million barrels per day in 2012. And the IEA offers a similar prediction, foreseeing an increase of 1.5 million barrels per day. That demand growth will almost certainly outpace the supply growth, adding volatility to the world’s energy market – and reducing the stability of the global economy. This trend does not bode well for the already hurting American economy as consumers and businesses start facing rising petroleum prices caused by increased international competition for the world’s limited crude supply.

The impact of increasing global oil demand won’t just be another blow to our economy. It could also have a severe effect on American relations with the Middle East and China. As we experience increasing international competition for oil – especially when the world’s conventional oil production hits its peak – we’ll see a rise in tension between China and the U.S. as both growing populations demand an increasingly luxurious lifestyle be fueled by petroleum. The competition for oil between the world’s two largest economic superpowers will in turn help drive up political tensions in the Middle East, causing more instability in petroleum prices that will hurt any chance of America’s economic growth.

Reducing the tensions in international petroleum politics during the course of the 21st century by weaning the American economy off oil is a common sense foreign policy we must follow to insure the stability of our relations with China, the Middle East, and other nations. The United States has the technology to upgrade itself into a clean energy nation during the course of the next four decades. But despite our technology and the many benefits that we will gain from building industries on the foundation of clean-tech innovations, some U.S. politicians and media pundits are still promoting the “Drill, baby, drill” theory of energy independence. Their claim is that pumping domestic crude from our offshore and Alaska reserves is our best option to free ourselves from foreign oil sources. It’s a false claim.

“Drill, baby, drill” is a slogan, not a solution. What America needs its leaders to create is a solid and viable energy policy that focuses not on “energy independence” but on “energy freedom.” Energy freedom is a concept Congressman Jerry McNerney (representing California’s District 11) came up while co-writing with me the book Clean Energy Nation: Freeing America from the Tyranny of Fossil Fuels. Energy freedom takes the common sense approach that the United States must position itself as the world’s leading nation in building a global clean-energy economy. If we can achieve this ambitious endeavor, we can promote economic and social freedom for all humanity by transforming the global market from one built on the shifting sands of fossil fuels to one built on a foundation of renewable energy production and energy-efficient consumption.

The concept of energy independence is folded into energy freedom. As we upgrade the U.S. toward a clean energy economy, we will reap the economic, political, and social benefits that will come from our no longer being highly dependent on other nations to provide us with our fuel resources. But energy freedom also provides other benefits. Our national security will grow stronger in a world where America has reduced its fossil fuel consumption and thus decreased the international competition for the planet’s limited supply of oil. With reduced international tensions from a clean energy-based global economy, America will have less chance of finding itself drawn into violent conflicts in the Middle East – or a potential oil war with China, a nation now building up its military might.

America’s public health will increase as we start reducing the toxins from fossil fuels now polluting our air, water, and land from the production and consumption of oil, natural gas, and coal. Increased public well-being reduces the cost of public health care. Healthier people are happier and more productive, adding to the quality of life for American citizens and a more vigorous economy.

America’s deciding to commit to achieving its energy freedom will promote the growth of clean-tech innovations in our university and government laboratories as well as in private research done by major corporations and by garage-based inventors. The wide-spread economic impact in producing clean energy from wind, solar, water, and biofuels – an impact multiplied by gains in energy efficiency in consuming that energy – will mean more prosperity and jobs for Americans as our people start to create the “green industries” for the world’s burgeoning clean-energy market. If America can get in early as the leader of this about-to-boom market, our nation can generate trillions of dollars over the next twenty or more years that will empower us to reduce our current financial debt to foreign creditors, thus reinvigorating the American dollar.

We can achieve energy freedom. But it will require the American people to change the way they look at energy production and consumption. It will require leaders on the state and federal levels to provide a vibrant vision for moving our economy from the Fossil Fuel Age to the Clean Energy Age. But unfortunately, as the cliché goes, “freedom isn’t free.” Transforming America into a clean energy economy will require massive capitol to rebuild our energy infrastructure and create the industries needed to support renewable resources and energy efficiency.

Two years ago, Congress failed to pass a “cap and trade” bill to reduce our hydrocarbon emissions. That cap and trade effort passed through the House as the American Clean Energy and Security Act of 2009 after much political deal-making among the Republicans and Democrat lawmakers. But the bill essentially came dead on arrival to the U.S. Senate where the partisan environment was too acidic to promote an open and honest discussion of its merits and liabilities.

Arising out of the ashes of cap and trade efforts is a new idea called “fee and dividend.” The plan places a carefully-monitored fee on hydrocarbons when they enter the American market – whether from a coal mine, an oil well, or an ocean-going petroleum tanker. Instead of this money going to the U.S. government’s coffers, one hundred percent of this fee will be divided among American citizens on a monthly basis to their checking accounts, thus reducing the financial impact on individuals from the rising energy costs induced by the fee. The fee and dividend approach will promote energy innovations and clean-tech industries that will wean us away from fossil fuels and build us into an economically-stable clean energy nation.

Fee and dividend is an idea that is steadily gaining support from both Democrats and Republicans. If managed smartly, it can also empower the United States to lead the world toward a cleaner and more efficient global energy economy that will mean more peace and prosperity for the people of all nations. Americans must lead the world to achieve energy freedom. With fee and dividend, we can reach that worthy goal.

Author Bios
Martin Cheek, co-author of Clean Energy Nation: Freeing America from the Tyranny of Fossil Fuels, has been a journalist for more than two decades specializing articles on the latest developments in science and the high-tech industry. He lives in Morgan Hill, California.