The decision of Standard & Poor to downgrade the credit rating of the United States of America from AAA to AA+ was clearly based on uncertainty in two major areas. The first and least important was the wrangling on the debt ceiling, which took the US to the brink of not being able to meet its debt servicing obligations for as long as the impasse lasted. The second was the increasing refusal of the American business classes to pay their fair share of taxes.

If a couple borrowed a big sum from the bank and had debt servicing obligations of say $10,000 a month, and they were repeatedly late and had a series of big shouting matches in the bank lobby about whether they might not just skip this month’s payment, then the next time they went to that bank for a loan, it would be declined or higher interest would be demanded, since they were clearly acting as though they were a bad bet for the loan officers. Getting a loan has in part to do with reputation, and with the lender’s expectation of being paid back with interest regularly and without delay. When you delay making a payment, you are in essence costing the lender money. If the lender has lots of people asking for loans, why would she make one to the couple that seems flaky?

So the first reason for the downgrade was the irresponsible and flaky behavior of the Tea Party, which created an artificial crisis for the benefit of its Koch Brother patrons, so as to throw more government resources at the super-rich and fewer at ordinary people.

The second reason for the downgrade was Dick Cheney’s insistence on deep tax breaks for the ultra-wealthy, and the Republican Party’s refusal to revise them. Obama wanted to raise taxes on the multi-millionaires and billionaires, but didn’t have the votes in the Senate to do so, and the Republicans threatened to take the welfare of ordinary people hostage (as they just did with the debt ceiling mafiosi tactics). I thought at the time that Obama should have dug in his heels and just called the Republican bluff, since it was clear that they would use those tactics on him at some point anyway.

Standard & Poor is saying that if you project out the US structural deficit– caused mainly by the Bush tax cuts, prescription drugs give-away and debt-financed wars–over the next ten or fifteen years, it is going to get worse and worse because rich people have started refusing to pay their taxes in the US. There is a long-term structural deficit that the Republicans in Congress are refusing to allow the country to redress. In short, they are talking about this chart, which I posted last week:

It would not take a large tax hike on the wealthy to fix the problem. Bill Clinton did it in the early 1990s. People who say that this step would not resolve the difficulty are shills for the super-rich and are refuted by the successfully balanced budgets of the late Clinton period.

People who say that the rich ‘create jobs’ and that taxing them would hurt the economy have to explain why corporations are making record profits but the rest of the population is increasingly living on food stamps.

What I read in economics was that it is bad for the economy to have a high gini coefficient, i.e. it is bad to have a big gap between a handful of wealthy at the top and great masses of poor at the bottom. It is much better if there is a big middle class and the rich aren’t so very rich.

Why is this the case? Well, you would want everyone who wanted one to be able to buy a car from Detroit. When people buy a Chevy Volt, that creates jobs at GM, and it creates demand for spare parts, which creates more jobs, and it creates jobs for car salesmen and for the people who make the battery, etc., etc. The real job creators are us ordinary folks, the consumers; we create jobs when we buy goods and services.

Times when the super-wealthy owned less of the country’s total wealth have tended to be prosperous times of American prestige in the world. There has been a big run-up in inequality in the US in the past few decades: 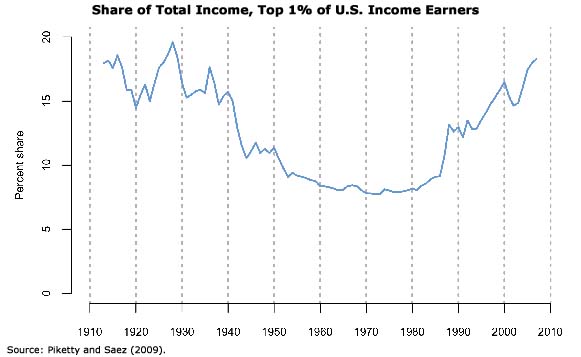 Tax policy helps to decide on the distribution of wealth in society. Using it to throw all your money to the top 1 percent and to reduce everyone else to relative poverty is a big drag on industry and services and causes unemployment. That’s right. If you don’t have a job, it is in part because Cheney cut taxes on the super-rich and made it impossible for the Federal government to ameliorate the economic straits of the middle class with various programs. This problem just got worse, with the budget deal this year.

Here is what the US gini coefficient (the measure of economic inequality) has looked like for the past over 40 years: 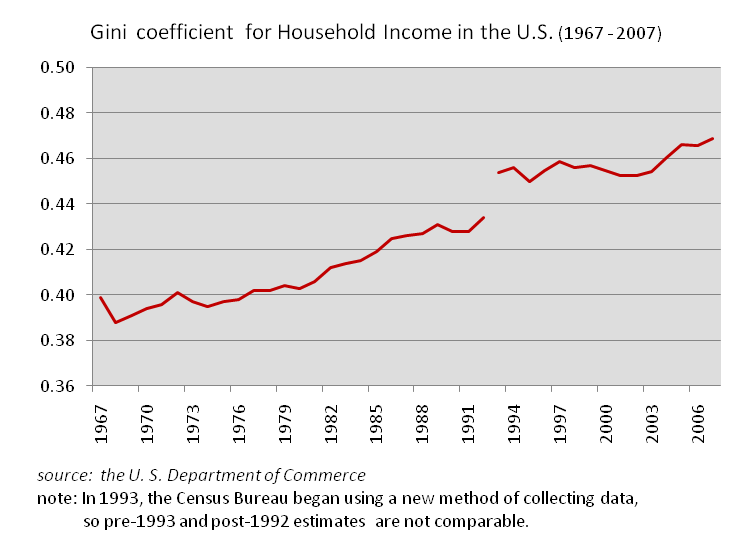 We increasingly look like a Third World robber baron country with a few rich at the top and luckless peasants toiling below.

The wealthy use the nation’s highways to transport their goods around the country. Interstates mainly benefit trucking companies and their clients. It is the trucks that are hard on the roads and require them to be rebuilt every summer. The highways are paid for by taxes. When Congress lowers taxes on the wealthy, it is saying they don’t have to pay for this public good that they benefit enormously from. It is saying that the people who make $50,000-$200,000 a year have to pay for the highways instead. And if the government uses tolls to pay for the highways, it is saying that even the minimum wage worker who uses a toll road to get to a fast food restaurant for employment has to pay for these highways and for the constant damage to them done by the big trucks serving the corporations, who are now held harmless from paying their fair share. Reducing taxes on the super-wealthy is a way of increasing taxes on everyone else.

Of course, joblessness was also caused in part by the near-Depression of 2008-2009 and its aftermath, which was caused by the government not regulating big banks and by it allowing most corporations to act like banks.

Most of our problems come from the US government coddling very rich people, which it does because the very rich pay for politicians’ campaigns and expect a payback. And as more and more of the country’s wealth has gone to the 750,000 families, they have gained more and more control over Congress. (Of course, it is the 400 billionaires who are the big players here). Their interests are increasingly not the same as the interests of the rest of us, and they are intent on screwing us over big time.

Standard & Poor does not care about whether rich people feel coddled. They want to know whether the US government is going to pay back the trillions it is having to borrow because it won’t tax the people with trillions of dollars. They don’t see how it can be sure of doing so with real dollars that are worth anything (the US government can always print more money to “pay,” but that will cause the real value of the currency to fall). So they are warning investors about that.

The likely outcome is that it will be more expensive for the US government to borrow money, which will worsen the debt crisis.

The long term effect of these trends will certainly be the decline of the United States, which has already begun. And it will be a further decline in the standard of living of middle class people in the US.

I spent the summer in places like Tunisia and Egypt, where people were similarly taken advantage of by the corrupt and the wealthy and by the politicians the latter bought, and where they rose up and got rid of the miscreants. It is a matter of some astonishment that most Americans are just bending over and taking this treatment without so much as a protest.