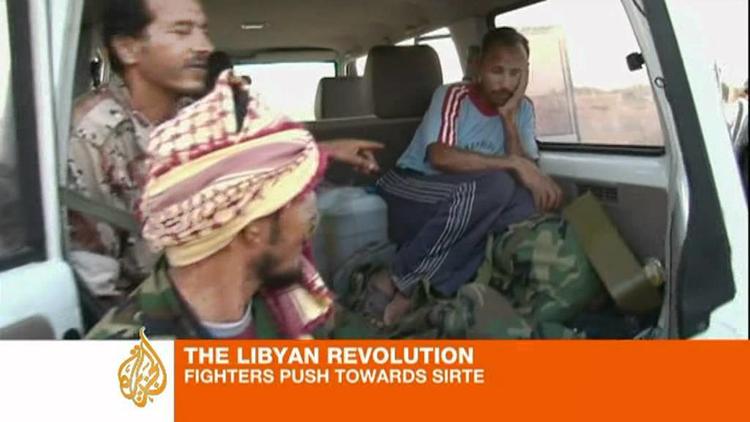 CNN’s intrepid Nic Robertson gets the scoop. He discovered that Abdel Basit Ali Megrahi, the convicted Lockerbie bomber, is in a coma in a villa in Tripoli. Megrahi suffers from prostate cancer. Megrahi was freed by UK authorities on health grounds, but there had been reports that he may have been in remission, producing some regret in the UK about his release.

As the search for deposed dictator Muammar Qaddafi continues, Reuters reports that a convoy of 6 armored Mercedes cars had entered Algeria from southern Libya. Algeria denied the reports. Misrata radio (see below) speculated that the cars may have contained the wives and other female relatives of Qaddafi.

Qaddafi loyalist troops in the outskirts of Sirte have taken farmers and their families hostage and are shelling Transitional National Council (TNC) forces’ positions from the farms. Free Libya fighters coming from the west are stalled and decline to return fire, fearful of hitting the civilians. Still, forces from the east have been advancing toward Sirte and have taken the town of Bin Jawad. The new Libyan government says it is attempting to negotiate with holdouts in Sirte, from which attacks have been launched on civilians and on the duly constituted authorities, but that if the city elders don’t surrender it will eventually be invaded.

With the fall this weekend of Qaddafi’s last outposts in the west near the Tunisian border, including Zuara / Zuwara, most of the country is now in TNC hands. Sirte and the southern outpost of Sabha are the main holdouts. Both are cities of about 120,000, but each is strategic. Sirte sits astride the route from the capital to the country’s second city, Benghazi. And Sabha is on a major smuggling route from southern Libya to the north. The Free Libya forces now control the road to Sabha from the capital, but are putting off taking that city till they take Sirte.

As evidence mounts of systematic war crimes by Qaddafi forces in their waning days, it turns out that Qaddafi’s son Khamis, a major general, allegedly visited the compound where the 55 prisoners were held shortly before they were machine-gunned down and their bodies set afire. Note the contrast in the Guardian article to how captured Qaddafi loyalists held at the school in Tajoura are being treated by the TNC.

Uri Avnery is eloquent about the Orientalism of the so-called leftists who play down the central role of the Libyan people in overthrowing Qaddafi. In Tobruk, al-Bayda, Dirna, Benghazi, etc. in the East, the people peacefully caused his government to fall in over a third of the country, as much of his military deserted to the rebel side, and they kept it that way. The only thing NATO did in the east was to prevent Qaddafi from bombing his own civilian cities, and to stop Khamis Qaddafi from leading tank brigades into Benghazi to conduct massacres there. In the west, the people threw off Qaddafi in key cities like Zintan and Yefren, and, again, NATO raids just stopped the tanks and artillery from crushing them. Zawiya threw off Qaddafi twice, being actually crushed in between the two popular uprisings. Tripoli was not taken by the rebel fighters for the most part, but rather urban workers in districts like Tajoura and Suq al-Juama rose up against the regime, letting the rebels just walk in mostly unopposed, save for a few loyalist districts that constituted only about 15% of the city.

Saying it was all NATO and the Libyans are owed no credit is, as Avneri says, the typical move of the old Orientalist historiography. (I’ve spent my life writing about things like Egypt’s Urabi revolution of 1882 and other popular movements that imperial historians had tended to dismiss as military coups from the top. I’ve found the archival documents to at least make my case, and it is distressing that people who imagine themselves on the left today sound so much like Lord Cromer used to.)

The Open Source Center reports on the broadcasts from the Misratah voice of Free Libya radio Station on Sunday. I know this summary is a little dense, but do read through the excerpts I present below. It is the best way to get a sense of “who the rebels are”– this is what they are telling each other on their own radio station. Note the aspiration for a rule of law and democratic governance. People who keep going on about al-Qaeda in Libya are not paying attention to who the political leadership of the new Libya really is and what they say they want when they are speaking in Arabic among themselves. Note also the increasing hostility toward Bashar al-Asad’s Baath Party in Syria, a de facto Qaddafi ally that is still broadcasting the deposed dictator’s rants.

Misratah Voice of Free Libya (VOFL) in Arabic up to 1800 GMT on 28 August reported that the rebels seized control of a Tripoli village that the pro-Qadhafi forces used as a base to attack the capital’s airport. It said the airport was secured by the rebels…

VOFL quoted rebel sources as saying that the rebels seized control of the “strategic” Qasr Bin-Ghashir village in Tripoli (3km to the east of Tripoli Airport), which the Qadhafi troops used as a base to attack the airport. “The rebels now are securing the airport from all directions,” it said.

The sources said the rebels entered the village without fighting after the Qadhafi troops left it overnight. The rebels also seized a farm owned by Al-Qadhafi’s son Khamis in the village.

VOFL quoted the chairman of the TNC’s executive bureau, Mahmud Jibril, as saying that Al-Qadhafi would face “a fair trial” if he is captured. “The trial will examine the causes that led Al-Qadhafi to use all that violence and killing against his people since the beginning of the revolution on 17 February,” it quoted him as saying.

In statements to London-based pan-Arab newspaper Al-Sharq al-Awsat, Jibril voiced hope that Al-Qadhafi would be arrested alive. He said he wants to ask Al-Qadhafi why the latter “tortured” the Libyans over 42 years.

“Bringing Al-Qadhafi to trial will show the world the real attitude of the new system in Libya,” Jibril said. He also said that the rebels were deployed inside and around Tripoli in order to chase Al-Qadhafi. “They may find him and may not, but the first option for the rebels is to arrest him alive and not to kill him. And if he (Al-Qadhafi) or one of his children is arrested, there will be tight guard and if he is sentenced to death, he should be executed,” Jibril said. Sirte ‘needs more time’…

VOFL radio carried reports by various agencies about the potential whereabouts of Al-Qadhafi. It quoted a Middle East News Agency report as saying that Al-Qadhafi might have fled into Algeria.

It said an TNC spokesperson told the BBC that he did not believe that Al-Qadhafi was still in his hometown Surt. “Probably, Al-Qadhafi’s wife, daughter, and other allies fled to Algeria in a convoy of armored vehicles,” the spokesperson said.

Libya FM Radio in Arabic said Algeria had denied knowledge of the crossing of the convoy into its territories.

It quoted BBC Arabic TV as saying that a Qadhafi spokesperson told a news agency that Al-Qadhafi was ready to transfer power. It said the negotiations over that issue would be chaired by Al-Qadhafi’s son Al-Sa’idi. Syria’s support

VOFL quoted a report published on 28 August by the UK newspaper Daily Star as saying that Al-Qadhafi was getting a hand from Syria as he tried to escape the clutches of NATO.

It said a Whitehall security source told the Daily Star that “the despot was getting help from the hated regime of Syrian President Bashar al-Asad, who loaned his own spies to Al-Qadhafi”.

The source said the Syrian regime helped Al-Qadhafi plan his broadcasts and even arranged for them to be aired by Syrian TV stations.

“But the net was still tightening on Al-Qadhafi as the UK Royal Air Force helped to turn his once-feared security apparatus into rubble,” the report said.

BOTh VOFL and Libya FM radio stations continued to broadcast their regular religious and social programs during Ramadan.

In a program called “Talk about the revolution and future towards the establishment of the aspired democratic State”, VOFL radio discussed how to establish “a real State of law.’ It discussed the issue from a legal point of view.

Today’s episode of “Murabitun” (We are steadfast) program on VOFL interviewed workers in a power station in Misratah that was attacked several times by Al-Qadhafi troops. The workers talked about the damages that afflicted the power station due to the bombardment, and how they experienced hard times of work during the uprising.

Today’s version of VOFL’s program “Our Houses during Ramadan” interviewed some housewives, who talked about the difference between this Ramadan and last year’s Ramadan.