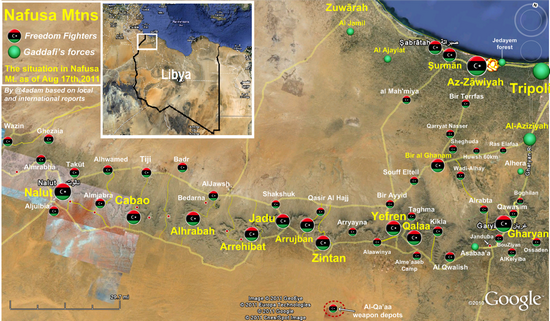 Libyan dictator Muammar Qaddafi is ill and is seeking a way to flee the country, according to the Arabic news site Albawaba.com. This report is plausible if only because Qaddafi’s performance on Sunday, in which he released a jumbled and mostly inaudible speech to state media for broadcast, raised questions as to whether he is all there.

Aljazeera Arabic’s correspondent in Zawiya reports that on Wednesday, Free Libya forces continued their advance in the western city of Zawiya. By late afternoon they had taken the gates of the refinery, the last major urban facility in the city under Qaddafi’s control. An unconfirmed report late Wednesday, according to Aljazeera, alleged that the rebels had taken the refinery in the eastern Hirsha district of the city.

The Aljazeera correspondent in Zawiya said that a rebel commander, Abdul Bari al-Zawi, was asserting that Free Libya forces had taken the refinery completely. He said that the equipment at the refinery is in excellent condition, and that it should be possible to have it working again in a matter of days.

Update: The BBC confirms that the Free Libya forces have taken the refinery at Zawiya.

Free Libya forces in Tawargha say that they have discovered a mass grave with 150 bodies. They appear to have been persons from Misrata captured by Qaddafi’s forces and summarily executed once taken as prisoners to Tawargha. The rebels say they also found a video in which the troops recorded some of the bloody executions. The allegations have yet to be confirmed, but if they are true, this is a major war crime and would be added to the charges against dictator Muammar Qaddafi at the International Criminal Court.

Misrata forces recently took Tawargha from Qaddafi brigades who had been using the town as a base from which to shell Misrata indiscriminately (a war crime and an act of defiance toward the United Nations Security Council, which had ordered Qaddafi to stop attacking his own people).

Aljazeera also says that a source among the rebels in Misrata to the east of Tripoli told the Qatari channel on Wednesday that their troops had advanced toward the east 40 kilometers from Tawargha to Heisha, where they were involved in fierce firefights with Qaddafi brigades. Heisha guards access to the city of Sirt, Qaddafi’s birthplace, among the last major cities in the east along the coast to remain in the hands of Qaddafi loyalists.

Aljazeera also reports that the Free Libya forces took control of the al-`Arqub district in the southwest of Brega, which will help them cut off aid to the Qaddafi brigades that has been coming from the west.

The Libyan al-Tadamun wire service reported that fierce fighting continued on several fronts inside Brega in the Second and Third districts. The rebels managed to remove a large number of landmines. According to preliminary estimates, Qaddafi had his troops plant a thousand mines per square kilometer.

Qaddafi’s planting of masses of land mines is a long term danger to civilians in Brega and a form of anti-personnel warfare increasingly felt illegal in international law. In recent years, only Burma, Israel and Libya have planted large numbers of mines. Qaddafi’s forces have also deployed cluster bombs in urban areas, endangering noncombatants and civilians.

In the south of the country, Free Libya forces liberated the town of Marzaq after heavy fighting that lasted for about 5 hours. They killed 10 troops from the Qaddafi brigades and captured 13, including an officer; they also destroyed some enemy munitions. One of the rebels was killed and three wounded in the battle.

In Sabratha to the west of Zawiya, the Free Libya forces not only completely subdued the city but they also captured the military base and transferred to themselves all the weapons in it.