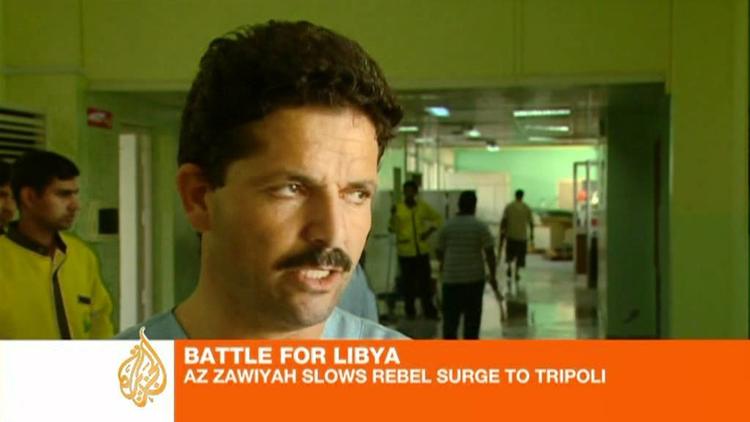 The rebel forces are racking up an impressive series of wins, decisively taking Zlitan, Surman and Brega on Friday into Saturday morning. Qaddafi is increasingly surrounded and cut off from fuel and other supplies. NATO has visited substantial attrition on his heavy weaponry and armor, which he had used to attack his own people. Dissidents in the towns surrounding Tripoli and in the capital itself are reportedly beginning to take heart and to plan their own uprisings and guerrilla actions. Zlitan was taken with the help of rebels within the city, e.g. I was struck, on seeing Aljazeera’s on the scene footage from the center of Zlitan, by how the victorious rebels spoke of themselves as the conquering “youth.” And they did look young, just teenagers or early 20s. That is the answer to the question often asked abroad, about who the rebels are. This is a youth revolution above all. They are a cross-section of the country’s young people.

In a further sign of the times, former Qaddafi no. 2, Abdel Salam Jalloud, fled Tripoli for Zintan and defected to the rebel side. Jalloud was one of the makers of the 1969 coup in which Col. Qaddafi came to power. NATO continued its bombardment of command and control centers and weapons depots in Tripoli, from which plans have been being made to attack dissident civilian populations. Among the targets taken out was the compound of intelligence chief Abdullah al-Sanoussi, one of the chief planners of the state terror against Libyan civilians pursued by the regime for the past six months.

The Transitional National Council is saying that its forces have completely taken the oil city of Brega. Brega consists of three basic areas, two residential and one the industrial city around the refinery. They are saying they have all three. It is a crucial victory. Although the refinery has been closed for months because of the war, it is even more important than the one at Zawiya in the West, which Free Libya forces have also captured. Brega has been the de facto border between Qaddafi-held territory and TNC territory in eastern Libya for months, and its fall is a milestone on the way to the collapse of the Qaddafi government in Tripoli.

The opposition press is reporting that early Saturday morning, Tripoli ordered all of its troops out of Brega after their commanding officer, a major, was taken prisoner by the Free Libya forces. The latter declined to chase the retreating enemy however, because it was pitch black in the middle of the night and they feared an ambush. They said that they chase would commence at sunlight.

Substantially to the west of Brega, Free Libya forces from Misrata entered neighboring Zlitan despite facing tank and artillery fire, and gradually pushed back the Qaddafi units holding the city. They lost over 30 dead and over 100 wounded, putting stress on the city’s hospital. They captured the city’s internal security chief, who had been in charge of domestic surveillance and secret police tactics to control the city. Among the secret of the Free Libya fighters’ success is that they were able to join up with rebels from the city itself, who took up arms once they had an ally. Aljazeera is showing scenes of celebration and joy in liberated downtown Zlitan.

After a fierce counter-attack by the remaining loyalist troops in Zawiya on Friday afternoon, rebel forces counter-attacked effectively and took the central square of the city.

It turns out that the southern town of Marzuq was taken from Qaddafi loyalists by the Toubou tribes of south Libya and of Chad. Each of Libya’s ethnic groups is writing its own chapter of the revolution, creating heroes and myths that will be invoked to legitimate their full membership in the Second Republic.

Dr. Fathi Ben Shatwan alleges that Libya’s vast oil wealth has in recent years been controlled by Saif al-Islam Qaddafi, and that under the old regime tens of millions of dollars were embezzled from the oil proceeds.

A dark chapter of secret police rule, looting of the national treasury, disappeances, torture, and military adventurism abroad is coming to an end in Libya. The TNC hopes to move to parliamentary elections in the next 6 to 8 months, and is already attempting to include all the major tribal groups in its advisory assembly. Libya is within sight of a normal future if its revolutionary population can maintain its unity in the aftermath.